On July 2, 2020, Fertile-Beltrami High School Student and Football player Jude Olson was tragically killed in an ATV accident. Olson would’ve been a Senior on this year’s Football team that is getting ready to compete for a State 9-Man Championship on Saturday morning at U.S. Bank Stadium.

Jude’s hobbies included listening to music, playing on his X-Box, cracking jokes, swimming, spending time with friends, and 4-wheeling. Friends say it was never a dull moment when Jude was around. Jude’s parents are Aaron and Jill Olson, and he also had two brothers Jasper and Josiah.

Every football game this season, the #65 jersey which Olson wore can be found somewhere along the sidelines in remembrance of him, as the coaches and players honor him each time they take the field. Head Coach of the Fertile Beltrami Falcons Brian Nelson said everyone decided and was on board with bringing his jersey to each game. “Getting ready for last season, we talked about bringing his jersey to each and every game, and it’s something that has carried over into this season as well,” said Nelson. “He would’ve been a Senior with these guys this year, and it was just a tragic thing that happened. We felt it was a great way to honor him and for the guys to know he’s still a part of the team.”

Olson had played a little bit at the guard position and the nose tackle position as a sophomore, and Nelson said he was a valuable part of the team. Olson also went to the State Tournament for wrestling as a sophomore and was a gifted athlete.

One of the Seniors on the Fertile-Beltrami Football team that was close to Jude is Senior runningback and linebacker Levi Qualley. Qualley said he considered Jude one of his closest friends, and it would mean a lot to the Senior class if they could bring home the State Championship on Saturday. “It would definitely mean a lot to me, I guess,” said Qualley. “That’s one of the biggest reasons for us Seniors to play football is for him and just trying to succeed and do our best with him in mind.”

Another Senior on the Fertile-Beltrami Football team that grew up with Olson is runningback Everett Balstad. Balstad says he knew Jude since he was four years old and that competing for him gives the team all the motivation they need. “We kind of just grew up playing sports together, but he was actually one of the first people I met when I came to Fertile because we went to daycare together,” said Balstad. “Since last year, we’ve been extremely motivated to play for him, and it just helps us play together when we’re on the field.”

Head Coach Brian Nelson also said throwing the tragic accident into the mix of dealing with COVID-19 last year has made this group of kids resilient, and he’s been incredibly proud to coach them. “You look at what we also dealt with last year because of Covid, and these kids have been through a lot,” said Nelson. “These kids have played hard all season long and haven’t overlooked anybody. They prepare week in and week out regardless of the circumstances, and we have a big task coming up on Saturday.”

Nelson expects Saturday to be a battle but believes that the team can bring home the State Championship trophy. “It’s something very few teams get the chance to do,” said Nelson. “Every team except one in each class always ends the season with at least one loss. It’s going to take quite an effort on our part, but this is a group that prepares well, and I like our chances if we can get our guys to understand what LeRoy-Ostrander will be trying to do.”

The Falcons will look to secure that final win to bring home a State Championship in honor of Olson this coming Saturday. Fertile Beltrami (13-0) will take on LeRoy-Ostrander (11-2) in the State 9-Man Championship on Saturday, November 27, at U.S. Bank Stadium in downtown Minneapolis. The kickoff is set for 10:00 a.m., and the game can be heard on KROX with the RiverView Health Pregame show starting at 9:00 a.m. 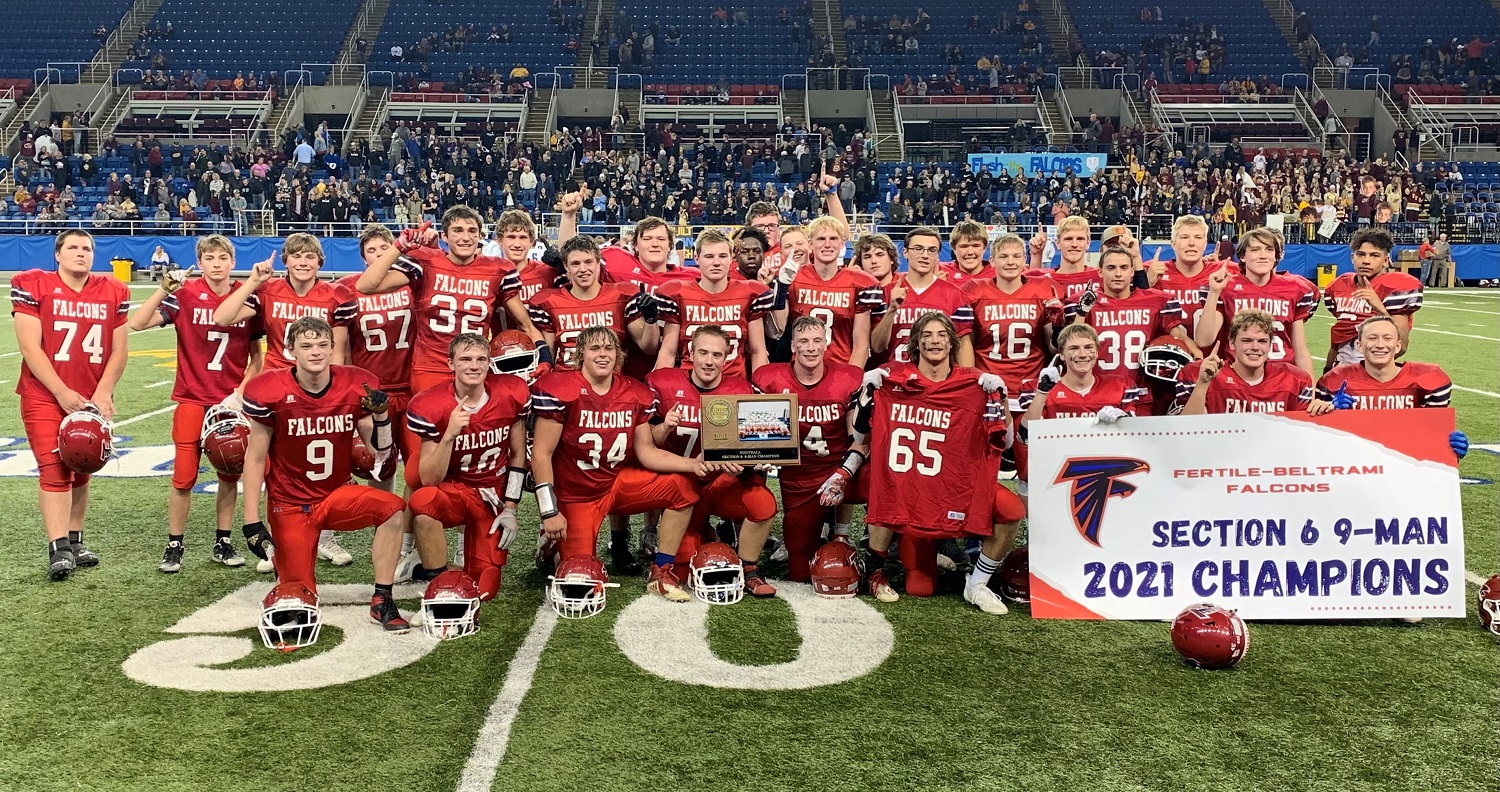