The visitor’s guides were the first big project completed.  “The visitor’s guides are done, printed, ready to go,” said CVB Chair Nell DeBoer. “We have distributed them to all of the hotels and down the road, we’ll have kind of a visitor’s center in each of the hotels with a display for pamphlets and flyers for tournaments, and things like that coming up. We talked with the city and city hall is where you can get your free guide. We encourage everybody in Crookston to get one. It talks about all the events that are coming up, when they are, lots of good information. I’ve lived in Crookston since 1982 and I’ve learned a lot by doing the guides as to what’s going on and that kind of stuff.” 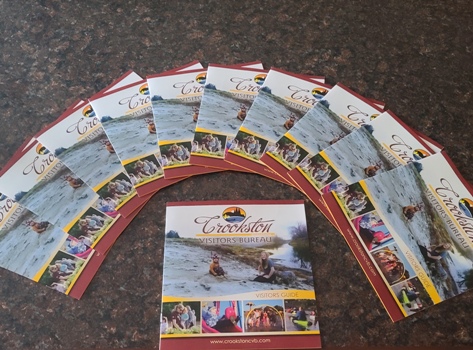 The guides will also be making their way around the state. “They will also be making their way up and down the valley and along Highway 2 all the way to Grand Rapids, Duluth, Hibbing,” said DeBoer. “We’re also going to have them at the Minneapolis-St. Paul Airport where they depart and arrive. And also, at the Mall of America, in the kiosk there.”

A website is also on the horizon for the CVB. “The next project we are working on is the website,” said DeBoer. “If you go in the guides it tells you what the website is (crookstoncvb.com). That is not quite ready to go. The guides happened first. But our goal is to have that up by May 1.”

The other big project the CVB has been working on is updating the Welcome to Crookston signs. “If you’ve noticed as you come into town is the entrance signs,” said DeBoer. “They’ve got those torn apart, especially the one by the sugar beet plant, they have the signs torn apart. We are working on getting new signs up. I have a June 1 goal for having those up this summer when people come to Crookston. It’s a big project. The CVB is leading the effort and we’re also including our partners – the City of Crookston, the Crookston Housing and Economic Development Authority (CHEDA), the Downtown Crookston Development Partnership, and Travis Oliver and the Crookston High School trades class.”

Two local business owners also donated labor and materials to the project. “We also received a generous donation from two local landscapers – Morgan Terpstra from Total Lawn Care and Ryan Lariviere from Outdoor Solutions Landscaping,” said DeBoer. “They are doing the demo on the signs now and then will be putting in the landscaping that will be downsized a bit from what they are now. Both Ryan and Morgan are Crookston natives. They’re very interested in giving back to the community and have donated both labor and materials toward the renovation of the beds. CHEDA has also made a monetary donation toward the landscaping as well.”

The trades class at Crookston High School will also be involved in placing the signs. “Travis Oliver will be putting the signs up,” said DeBoer. “He and his trades class have done some work on them already. The frames are 12-feet wide by 10-feet high with 4-feet of clearance. Fast Line graphics is doing the graphic part of that and the CVB logo will be included in that. The CVB logo will be incorporated in that, so it looks very sharp. We are very impressed with our logo that Ye Ole Print Shoppe helped us design that which features the steeples, river, trees by the river.” 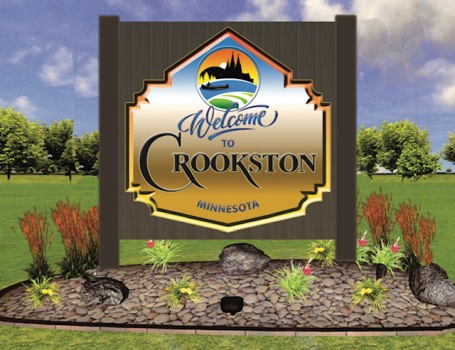