Minnesota State-Mankato Maverick Men’s Hockey Coach, Mike Hastings has won the College Men’s Hockey Coach of the Year award as awarded by CCM and the American Hockey Coaches Association.  The award is the second in his career, with the first coming in 2015.  Hastings is a Crookston High School graduate and a member of the Crookston High School Hall of Fame.
Hasting’s Mavericks (22-4-1) will play in the NCAA Frozen Four National semi-final game against the St. Cloud State Huskies on Thursday.
Hastings has a career record of 236-89-24.  Hasting’s winning percentage is the highest among active D-1 Men’s hockey coaches at .711.
If the Mavericks advance to the National Championship game on Saturday, you can hear it on KROX Radio.

The fourth coach in the history of the Maverick men’s hockey program, Hastings arrived at Minnesota State following a three-year stint as the associate head coach at Nebraska-Omaha. He also served as an assistant coach with the men’s hockey program at the University of Minnesota for one season and before that had a 14-year run as head coach of Omaha of the United States Hockey League. He left the USHL as the league’s all-time winningest coach, compiling a 529-210-56 record with the Lancers, never had a losing season and led Omaha to three Clark Cup titles as the USHL’s play-off champions. He was named USHL Coach of the Year three times and as the team’s general manager, earned league GM of the Year honors five times.

Hastings was an assistant coach for the U.S. national junior team at the 2003 and 2005 International Ice Hockey Federation World Junior Championships and served twice as head coach for the U.S. junior select team that competed in the Viking Cup, earning gold medal honors in 2000. A 1993 graduate of St. Cloud State, Hastings played two years for the Huskies (1986-87 and 1987-88) before a back injury ended his career. Assisting Hastings this season were Todd Knott, Darren Blue and Brennan Poderzay.

The Spencer Penrose Award is named in memory of the Colorado Springs benefactor who built the Broadmoor Hotel Complex, site of the first 10 NCAA championship hockey tournaments. The CCM AHCA COACH of the YEAR AWARDS are sponsored by CCM HOCKEY and chosen by members of the American Hockey Coaches Association. CCM is the legendary hockey brand dedicated to the endless pursuit of performance by delivering game-changing, head-to-toe innovative hockey equipment to players worldwide. 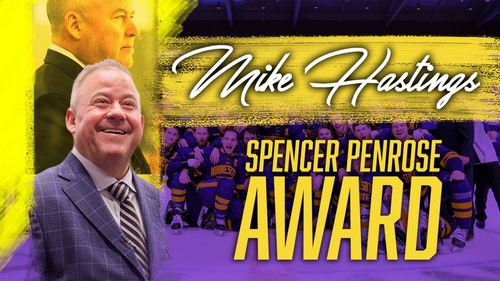