The University of Minnesota Crookston women’s basketball team announced the signing of Alex Page (6-0, Grand Forks Red River) Lily Orazem (5-9, Onamia/Central Lakes College) to a National Letter of Intent. Orazem has four years of eligibility to compete for the Golden Eagles after graduating in 2020. 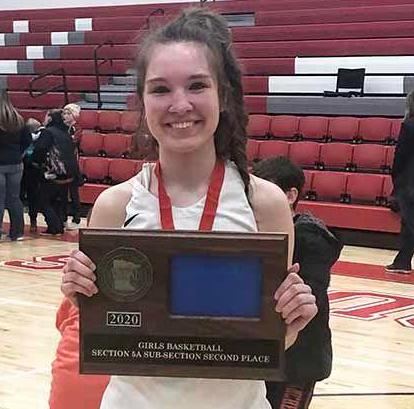 basketball history. She was the Great River Conference MVP for the 2019-20 season. Orazem is a four-time All-Great  River Conference selection. She scored 2,595 career points and 1,000 rebounds. Orazem has six scoring and rebounding records at Onamia H.S. She was a three-time captain. She attended Central Lakes College for the 2020-21 school year but did not play basketball.  “Lily is a guard who can play multiple positions for us,” said Head Coach Mike Roysland. “Her big strength is her ability to create off of the bounce. Lily is a great kid who has a very high IQ. We are very excited to add her to our signing class.”
Orazem is the daughter of Bob and Lynn Orazem. Orazem plans to major in elementary education at UMC. She has four younger siblings Brook, Anne, Bo, and Luke. Orazem also played volleyball and track in high school. 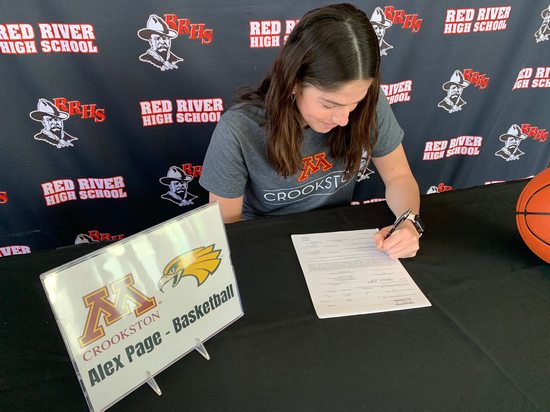 Tournament over Valley City H.S. March 2 as Page went 9-of-18 from the field with a game-high 22 points. Page helped lead the Roughriders to first place in the EDC during the regular season with an 18-2 mark.  She has scored in double figures in 21 of the 23 Red River H.S. games. Page was a North Dakota Class A All-State First Team pick in volleyball. She was a Class A All-state Second Team selection in volleyball as a junior.  “I am really excited because I feel like this is a big-time commitment because of her athletic skill-set,” said Mike Roysland. “Alex is a player with great court awareness and she has a beautiful stroke from the outside. She is very strong at finishing at the rim. I hope she will be able to impact the program early on. We are excited to add Alex to the Golden Eagle women’s basketball program.”

Page plans to major in health sciences (pre-med) at UMC. She is the daughter of Kristy and Allan Page. Her mother Kristy Page played basketball at UND-Lake Region (now Lake Region State College), where she was an All-Conference basketball player and a Second Team NJCAA All-American.