ETHAN BOLL –
Ethan Boll, a sophomore ranked #3 in the state with a 36-2 record on the year, took on Carter Quam, a senior ranked #5 in the state with a 27-3 record.
There was a lot of action in the first period, but neither wrestler scored for a scoreless first period. In the second period, neither wrestler could score a point until Boll had a nice reversal with one minute left. With one second left in the period, Quam scored a point with an escape, and Boll led 2-1 after two periods.
Quam scored another point with an escape to tie the match at 2-2. Quam scored another point to take a 3-2 lead, but Boll countered with a quick takedown for a 4-3 lead. Boll let Quam go, and the match was tied at 4-4, and Quam scored two more points with a takedown for a 6-4 lead. Quam was in control, and with a couple of seconds left, Boll took a last-chance shot at a takedown, but he ran out of time, and Quam won the match 6-4.

Consolation semi-finals-
Ethan wrestled Gideon Ervasti of Bertha-Hewitt, a Junior that is 26-3 on the year, in the consolation semi-finals.
Boll had a takedown with one minute left in the first period, but they were on the edge of the mat, and no points were given.  Nobody scored a point in the first period.
In the second period, Boll scored the first point of the match with an escape after starting in the down position, and nobody scored the rest of the way.
Ervasti started the third period with a reversal for a 2-1 lead about three seconds into the period. Boll countered with an escape to tie the match at 2-2 with 90-seconds left.  Boll added a double-leg takedown with less than a minute remaining for a 4-2 lead.  Ervasti countered with a reversal with 20-seconds left to tie the match at 4-4.  Boll looked like he would score some points, but he ran out of time as the buzzer sounded to force overtime.
22-seconds into overtime, Boll had a takedown to win the match 6-4 to advance to the 5th place match.

Fifth-place match
Ethan Boll will take on Caleb Vancura, a sophomore from Jackson County Central that is 32-4 on the year, for fifth place.
Boll finished his sophomore season with a great six minutes of wrestling. Ethan scored on a takedown 42 seconds into the match for a 2-0 lead. Vancura cut the deficit in half with 28-seconds left in the period with an escape.
Ethan scored three nearfall points in the second period with 43 seconds left for a 5-1 lead. Vancura got a point on another escape late in the period, and Boll took a 5-2 lead into the third period.
Boll started the third period in the down position and scored a point with an escape eight seconds into the period. Ethan followed with a takedown13 seconds later for an 8-2 lead. Halfway through the period, Vancura scored on another escape, but 16 seconds later, Boll scored two more points with a takedown, and he held on the rest of the way for a 10-3 victory to earn fifth place in the state at 195 pounds.
Boll ends the season with a 40-4 record.

ZACH BROWN –
In the first round, Zach Brown, a senior 34-5 on the year and in his fourth state tournament, wrestled Ryan Jensen, a freshman from Belgrade-Brooten-Elrosa, who was 33-4.
Brown shot for the leg halfway through the first period and almost got the two-point takedown, but the wrestlers were outside the circle, and no points were awarded. After another minute, it was a scoreless first period.
In the second period, Jensen scored the first point with an escape, and that is how the second period would end with Brown trailing 1-0.
Brown started the third period in the down position, and 44-seconds into the period, Zach scored on an escape to tie the match at 1-1. With 10-seconds left in regulation, Brown tried to counter a front headlock and almost got a takedown, but the whistle blew without a point awarded, forcing an overtime period.
The first overtime was 60-seconds, and neither wrestler scored. In the second overtime (30-seconds), nobody scored, forcing a third overtime.
In the third overtime, Brown was called for stalling with 12 seconds left. Brown came close to a takedown, but time ran out, forcing the fourth overtime.
In the fourth overtime session, four-seconds into it, a potentially dangerous hold was whistled, and they started back in the middle. And with four seconds left, Jensen scored a reversal to win the match 3-1.

Consolation Semi-finals-
Brown wrestled Lane Fink of Canby, a sophomore that is 31-6 on the year, in the consolation semi-finals.
Brown and Fink were close to scoring a takedown.  After about 20 seconds, Fink was able to take control and was awarded two points for a takedown with 22-seconds left in the first period.   Nobody scored the rest of the period, and Fink took a 2-0 lead into the second.
Brown got an escape to start the second period to get within a 2-1 deficit.  Brown was close to a takedown 30 seconds into the period, but the wrestlers went off the edge of the mat.  Nobody scored the rest of the period, and Fink led 2-1 going into the third period.
After a potentially dangerous hold, Brown elected to go both up, and Fink received a point for a 3-1 lead with 90-seconds left in the match.  Brown shot for the leg with 40-seconds left in the match, but Fink fought it off and a stalemate was called.  Brown tried another shot, but Fink countered it and Zach wasn’t able to score a point and lost 3-1.
Brown’s outstanding wrestling career comes to an end in his fourth state individual wrestling tournament appearance with the loss.

Brown finishes his senior season with a 35-7 record.

KROX talked with Coach Wes Hanson after the matches and the interview is below. 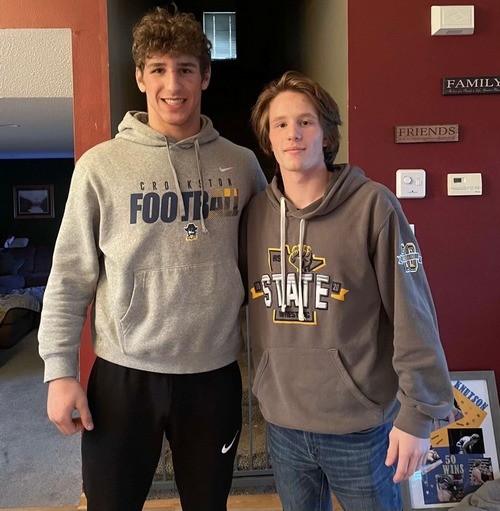