The markets for corn and soybeans are hitting numbers that haven’t been seen for about seven years.  In particular, Soybeans have gone from under $9 a bushel in August to over $14 a bushel on Tuesday.

CHS Northland Grain Merchandiser Tyler Aandal said stocks also haven’t been this low for about seven years.  “We’re looking at stocks we haven’t seen this low since the 2012-2013 run,” said Aandal. “We’re looking at seven-year highs for markets. Nearby soybeans are trading at a really nice level. We’re waiting on the new crop side of things, the 2021 crop, to catch up there, but nonetheless, still some nice levels for pricing new crop soybeans as well.”

The latest report Tuesday morning showed more bullish trade. “We’ve had really good markets here lately,” said Aandal. “We had USDA Supply and Demand Report out Wednesday at 11 a.m.  The trade was expecting a bullish report, and that’s what we got. We saw national corn yield down over three bushels to the acre for the average. We saw tighter stocks in both U.S. soybeans and corn as well. There are some good stories going on in the row crops at the moment. Demand is overall good. We have South American that we’re watching closely for weather and production issues as they’re getting their harvest moving along here. A lot of things are in play. The markets are extremely volatile this time of the year with how many things are pushing it around right now.”

Aandal said 2020 started quiet but finished strong, and that has continued into January. “2020 started out the way it was, markets were quitter, limited opportunities to make sales,” said Aandal. “But, really since September and on, the markets have basically straight lined up, and we’re looking at some really nice uptrends throughout both the corn and soybean markets and even wheat to an extent.”

Several factors have played into the improved markets. “We’re looking at things like demand, which we’ve had nice exports in,” said Aandal. “We’re looking at South America. They’ve been drier – southern Brazil has been a little dry, Argentina has been dry. They’ve had a season with late planting due to dry weather. That probably will cut into their product eventually because of that dry pattern they were in. Some of their shortfalls down there have contributed to this rally going up.”

Aandal said now growers start to determine what will be most profitable to plant in 2021. “Everyone is kind of budgeting and looking at acreage,” said Aandal. “That will be a big thing here this spring. As we’re seeing this rally throughout the winter, growers will be looking at what’s the most profitable, what works in their rotation the best. So, the prices couldn’t be happening at a better time right now as farmers make plans for 2021. Nearby crops here for 2020 product – corn just under $5 cash a bushel,” said Aandal. “Beans over $13. New crop-wise, we’re looking at those as well – corn basically $4 cash and beans well over $11 cash now. Really some attractive levels to start making some new crop sales.” 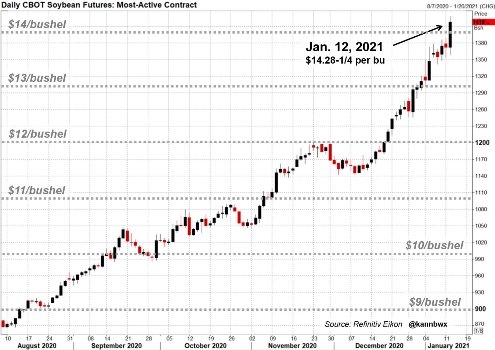