On Saturday, August 1 at approximately 4:15 p.m., the Crookston Police Department received a report of an elderly male driving a black or dark four-door car with North Dakota plates that was all over the road near Fisher traveling east on Highway 2 towards Crookston. An officer was stationed on the north end of town and identified the vehicle entering Crookston.

The car was observed the vehicle drifting in and out of the lane onto the shoulder of the road near McDonald’s. The officer then activated his lights and sirens near SuperPumper while the car continued south on University Ave. The driver nearly lost control of the car turning on W 6th St going over the curb onto the sidewalk before getting back on the road.  The driver continued east on W 6th St eventually driving straight through the intersection of W 6th St and N Main into Subway. The vehicle, a 2019 Chevrolet Malibu was driven by John Howard of Grand Forks.

Two customers at Subway were sitting outside on the patio and were able to get out of the way before the car struck the patio area. Officers noted the driver was disoriented but didn’t appear to be under the influence of drugs or alcohol. The cause of the accident appeared to be the result of a medical emergency.  The driver, John Howard of Grand Forks, received what appeared to be minor injuries from the crash due to the seatbelt and the airbags deploying.  The driver of the vehicle was transported to RiverView Health where he was treated for his injuries and released.

Although the cause was believed to be a medical condition, the driver was cited for driving conduct as the incident endangered the lives of others.

ORIGINAL STORY
A car crashed into the Crookston Subway Saturday evening. One person was reported injured. We will update this story more information when released by the Crookston Police Department. 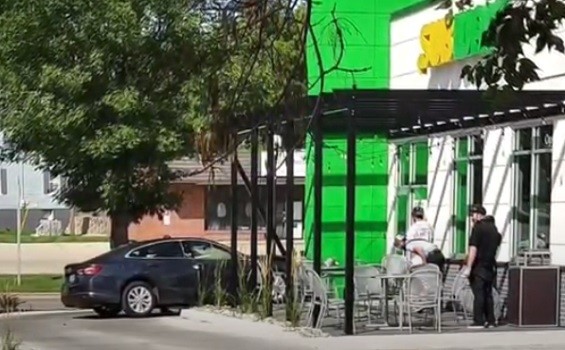