The Crookston Airport Commission met on Thursday morning to review the progress made by Short Elliot Hendrickson (SEH) engineering on the airport master plan. The Crookston Airport is used for approximately 50,981 operations, a takeoff or landing, a year, and is the most used airport by the University of North Dakota flight program.

SEH’s Melissa Underwood said the goal was to provide some alternative options for runways, hangars, and the other airport needs to discuss what the needs for the airport would be within the next 20 years. “Today, our goal was to take the forecast we’d developed last time and determine the needs that need to be met over the next 20 years,” said Underwood. “That goes on both the air side with the runways, taxiways, and approaches. And on the land side with hangars and the apron. We’re trying to determine what layout will work best for the community, city, and airport users for the next 20 years.”

The commission discussed possible runway expansion, such as extending the current paved runway to 5,600 feet to allow for small jets to take off, or changing the primary runway to a north/south orientation. Either possible change being made at some point would come with the need to close or reroute established roadways, with one plan making a rerouting of HWY 75 out of the safety area possible.  None of the options have been approved, and Underwood said the goal throughout the rest of the project is to determine what will be needed in the future and find the best option. “We’re looking at what runway length is needed over the next 20 years,” said Underwood. “And then, looking at the crosswind to see if another paved runway is an option or if we will maintain what’s out there today.”

Airport Manager Lowell Miller said there are many points of view on planning for the future, but the goal is to find what the community would use. Changes can’t happen without the ability to justify them for funding from the Federal Aviation Administration (FAA). “There are many points of view on that,” said Miller. “You’ll get some people that will say maintain what you have, and it seems to be working. There is quite the expansion to get larger airplanes that may come. You need to show that you need to get to their ultimate length. You have to figure out if there are people in the community who are going to use that length to justify the cost. The FAA has to have that justification to participate in those funds.”

Hangars continue to be a need, and several options were discussed, including building box or T-Hangars. Or even providing individuals or businesses the opportunity to develop their own hangars to their specifications, and then turn them over to the city when done through a lease agreement. Miller told the commission that if the city were to start building a hangar, it would probably be fully leased before it was finished.  Miller said deciding how to develop hangars or even using a combination of the hangar options would be about what fits best for Crookston. “There are a few options whether the city builds new T-hangars to store airplanes or we allow private companies and people to build their hangars,” said Miller. “There are a couple of options, maybe a combination of both. Just looking for alternatives for what fits our airport.”

Underwood said SEH would refine the alternatives for runways and hangars with the Minnesota Department of Transportation and FAA based on Thursday’s discussions. “Next, we’ll refine our alternatives based on the discussion today,” said Underwood. “And narrow it down to a few that the group can choose to show on the 20-year plan.”

The master planning process is expected to require at least two more meetings, according to Underwood, with the next meeting to be scheduled for around early October tentatively. 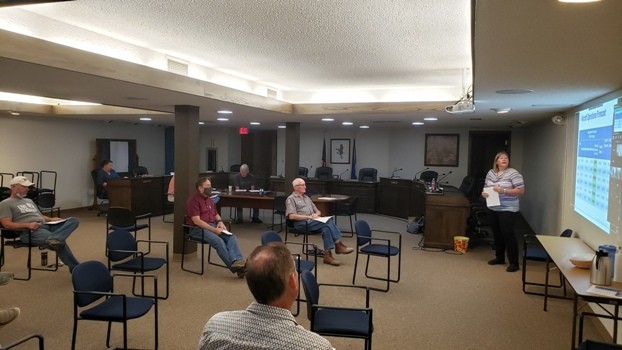