Governor Tim Walz today announced that he will convene a special legislative session beginning on July 13, 2020. The Governor continues to push for legislation on police reform and accountability and has asked the Legislature to join his effort to build a stronger, more equitable economy by passing a robust bonding bill.

“I am asking Republicans and Democrats in the Legislature to work together on the urgent matters Minnesotans expect them to tackle this summer,” said Governor Walz. “Our state had a trying few months, and we need the Legislature to rise to the occasion and get things done to help Minnesotans rebuild and recover. Give me a bill to sign on police accountability and reform and let’s work together to build a stronger, more equitable economy by investing in local jobs and projects across the state.”

“We are ready to work with our partners in the legislature to make meaningful change for Minnesotans,” said Lieutenant Governor Peggy Flanagan. “People across the state are counting on us to come together to invest in local projects, police accountability and reform, and a stronger, more equitable economy. Let’s get it done together.”

As they did last session, the Governor and Lieutenant Governor support the recommendations on police reform and accountability that were introduced by the Minnesota People of Color and Indigenous (POCI) Caucus and the Attorney General’s Police-Involved Deadly Force Encounters Working Group. The proposals support use of force reform; greater police oversight; community healing; and prosecutorial, investigatory, and training reform.

The Governor’s plan to build a strong and equitable economy will include his bonding proposal, the Local Jobs and Projects Plan, which will revitalize infrastructure across the state and create good-paying jobs. The Governor will also continue to work with partners at the community, local, state, and federal level to provide assistance for businesses impacted by the events in Minneapolis and St. Paul following the death of George Floyd.

Governor Walz will also extend the COVID-19 peacetime emergency by 30 days to ensure the state can continue to quickly and effectively respond to the pandemic. Every state in the U.S. has declared a state of emergency, allowing governors and other officials to quickly respond to rapidly-evolving threats stemming from COVID-19. 49 states currently have a state of emergency in place. 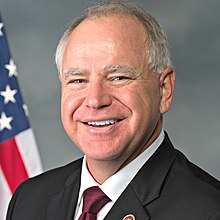