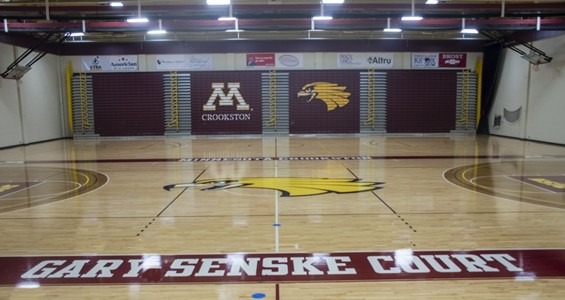 The University of Minnesota Crookston (UMC) recently has undergone a major renovation as the entire Lysaker Gymnasium floor was sanded down, repainted and sealed this spring. In addition, Golden Eagle athletics is very excited to announce that the renovated floor has been named in honor of one of Minnesota Crookston’s greatest all-time coaches, Gary Senske, and will be known as Gary Senske Court. The entire facility itself is still known as Lysaker Gymnasium. It was completed in 1981 and named in honor of former UMC athletic director and coach Hersch Lysaker.

UMC Athletic Director Stephanie Helgeson said it was exciting to honor Senske’s 21 years of coaching in Crookston.  “I am very excited to announce the naming of the floor at Lysaker Gymnasium to honor Gary Senske,” said Director of Athletics Stephanie Helgeson. “Gary’s passion for the University of Minnesota Crookston is unmatched. He was a staple on the sidelines at Minnesota Crookston for 21 years and has continued to be active with UMC after his retirement. His presence was very noticeable not only in the region but also state-wide with coaches, recruits, parents, and friends of the University. Gary is the longest standing coach ever and one of the most successful we have had at UMC. I see no one more deserving of this honor than Gary Senske.”

Senske said the announcement was emotional for him. “It means a lot (having the court named after me),” Senske said. “I know when I was first told about it I got a strong feeling in my chest and I got kind of choked up on it. I never anticipated that the court would be named for me. It is there and it will be there for a long time. It is kind of unique because I coached the first game at the facility when it was built. I was there in 1981 when the facility was opened. The changes that have occurred over the last 40 years have been a lot. My memories in Lysaker Gymnasium are the players and what took place on the court. A number of wins and number of losses. The good times and bad and all of those things put together. It is a whole lot of emotion and a whole lot of feeling that goes into that because it was a big deal for myself and for the campus when we first moved into the new gymnasium. For this to happen, as well, is an emotional experience that I will never forget, nor will my family.”

Senske is the longest-standing coach to ever coach at Minnesota Crookston and has the most successful record in the program’s history. He amassed 176 wins as head coach of the Trojans and Golden Eagle men’s basketball squads from 1981-2002. Senske coached the team at three different levels, as he began when the team competed in the NJCAA, coached the squad through their transition as a four-year school in the NAIA, and again during a transition to NCAA Division II in 1999. Senske’s passion for the University of Minnesota Crookston was exemplary as he recruited numerous student-athletes to the campus in his 21 years representing the campus. His presence was very noticeable not only in the region, but also state-wide with coaches, recruits, parents, and friends of the University. Senske’s overwhelming success was evident with his 61 percent win-loss percentage that included 12-consecutive winning seasons, a division championships, four-division runners-up, a State Championship, and a Region XIII runner-up finish.

Senske recalled some of the most memorable games from his 21 years as head coach, and the rivalries developed over his years leading the program.  “We won the state tournament back in 1985-86 and then we moved on to the regional tournament and that was held in Lysaker Gymnasium,” Senske said. “We had a big win in the first round and had a disappointment in the second round. We were winning and then in the last seconds it was a free throw situation and the guy grabbed the rebound and put it back in. We weren’t able to move into the National Tournament, but it was a big win and the culmination of that. Those are two of the bigger games that occurred on that court that I can remember. We also had big rivalries with Northland Community College when we were a community college and then we started building rivalries when we moved into Division II with MSU Moorhead and Bemidji State, and those different colleges in the area because we were always recruiting against them. There have been a lot of memories at Lysaker Gymnasium.”

The Lysaker Gymnasium floor renovation pairs with phase one of the renovation that was started in the summer of 2019. The facility received a facelift with state-of-the-art bleachers, a new sound system from NLFX in Bemidji, and a brand new state-of-the-art Keemotion live stream and instant replay camera system. In addition to the new floor, the facility will also have brand new portable basketball goals for the 2020-21 season.

The Lysaker Gymnasium floor project was completed by the H2I Group. The floor, originally installed prior to the 2007-08 season, had not been sanded down and repainted in the 13-year span. The new paint scheme includes “Gary Senske Court” on the south side of the floor, “Minnesota Crookston” on the north side of the floor, “Golden Eagles” on both baselines, “M Crookston” logos in white in all four corners on the north and south side, and gold “NSIC” logos just under the free throw line on the east and west sides. In addition, the Golden Eagle logo was enlarged from the previous iteration. One of the more noticeable changes is a lighter stain on the majority of the floor, with a darker “spice brown” stain inside the three-point arc on both the east and west sides.

A dedication for the floor is slated for the fall of 2020. The first volleyball game is currently scheduled for Friday, September 18 against the University of Sioux Falls. The men’s and women’s basketball programs are still finalizing their 2020-21 schedules.