Crookston High School teacher and coach Wes Hanson isn’t only a great teacher and coach, but he is also an avid Muskie fisherman. The thrill of catching the monster fish has had him “hooked” for the past 10-plus years. “Just hearing the word Muskie makes my eyes light up,” said Hanson.
The story on how Hanson’s love for Muskie fishing started, where he likes to fish, and more is below.

HOOKED ON MUSKIE’S AFTER THE FIRST TIME
Hanson’s love for Muskie fishing started while he was going to school and wrestling at St. Cloud State. “My teammate on the wrestling team, Joe Anderson from Bemidji, is an expert Muskie angler and has a lot of experience, and I told 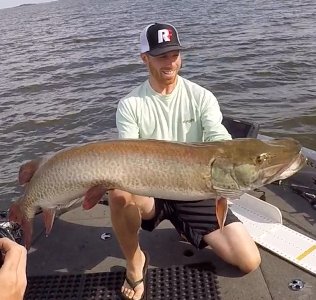 him to take me out some time,” said Hanson. “We went out and had fished for several hours, and they were teaching me the ropes. It is kind of exhausting throwing large baits and repeatedly casting and hadn’t had any action. Towards sunset, the wind laid down a little bit, and we were down to the last cast. Right as my bait hit the water, I noticed something off to the left and my head I remembered I wanted to reel in the bait really fast and cast it back out there. I was reeling the bait in real fast, and it got within 30 feet of the boat, and all of a sudden, a large submarine-looking Muskie materialized behind my bait and was stalking my bait. I got excited and kept reeling and reeling, and a technique that you do in Muskie fishing is a figure-eight, and I tried to go into a figure-eight maneuver, and the Muskie went under the boat and my trip was made. I thought that was the coolest thing ever and they told me to keep it going (the figure-eight), and it seemed like a minute, or maybe more like 30-seconds where I had done about a half a dozen figure-eights and all of a sudden out of nowhere the fish came back out and clamped down on my bait, and a few seconds later, after a good fight, we had it in the net. It was the most adrenaline spike I have had, and from then I have been hooked.”
The first Muskie he caught was around a 46-inch fish, and it was the start of a love of Muskie fishing.

CATCHING MUSKIE ISN’T EASY
Hanson said Muskie fishing can be exhausting, and it isn’t a relaxing day on the lake. “You are very active. It can be physically and mentally exhausting at times, and a little frustrating,” said Hanson. “When you catch one, it makes it all worthwhile.”

They call Muskie the fish of 10,000 casts. “It is a trophy fish, and people target them to get a picture with,” said Hanson. “I put in a lot of hours to get my first fish over 50 inches. I have made a lot of mistakes along the way and putting time in on the water, and I am still learning.”

HANSON’S TOP LAKES TO FISH FOR MUSKIE
Minnesota is known as the land of 10,000 lakes, and Hanson believes 99 lakes are managed for Muskie. “They like the cold water, deep lakes, and northern Minnesota is prime for that,” said Hanson. “There are great Muskie lakes in the Bemidji area, Leech Lake, and the Detroit Lakes area has some good fishing. Even Lake Minnetonka in the Cities, Mille Lacs Lake, Vermillion in the northeast and my favorite lake to fish is Lake of the Woods on the Canadian side.”

WHAT DO YOU USE TO CATCH A MUSKIE
There is a lot of lures and bait available for Muskie fishing, but Hanson says you only need a few things. “You need to get a rod that can handle the baits. I started 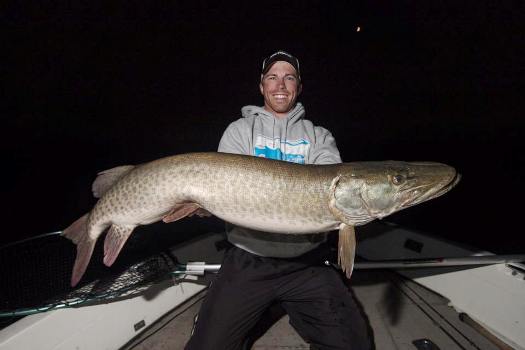 with a seven and a half foot rod, then it was an eight and a half foot rod, and now I fish with a nine and a half foot rod,” said Hanson. “The longer the rod, the wider turns you can make while you are doing the figure-eight maneuver. You will need a baitcasting reel, and I fish exclusively with an 80-pound braid line, and I typically use a 150 or 180-pound fluorocarbon leader, 12 to 14 inches, so sturdy equipment. Buckle down the drag on the reel so you can get a good hook set, and my favorite bait to use is a bucktail. It is a lure you cast out and a straight retrieve, and my favorite one is the Green Lantern from Big Tooth Tackle, and that has been the best lure for me, and I have developed a lot of confidence in.”

WHERE TO FIND MUSKIE IN THE LAKE
Like all species of fish, Muskie move around depending on the time of year. “When I am casting, it is into less than 10 feet of water, so pretty shallow. I usually target weed beds, and if you can find pondweed or some people call it Muskie cabbage,” said Hanson. “They like rocks at certain times throughout the year. It is a tough time and can get frustrating. If there is a little bit of wind, it seems to help, but it depends on the lake.”

TECHNOLOGY HELPS WHILE FISHING FOR MUSKIE
One thing that has changed the game is the side imaging fish finders. “You can look out both sides of the boat, and people drive by and it paints a pretty clear picture,” said Hanson. “Having good electronics is pretty important, and it definitely helps.”
Hanson said if you know a fish is there, you will be more focused and keep fishing the area longer.

BRAND AMBASSADOR FOR BIG TOOTH TACKLE
Hanson has some connections with a Muskie tackle company.  “I mentioned the Bucktail earlier, and Big Tooth makes the best one,” said Hanson. “I am on their pro staff, and I mentioned Joe Anderson got me into this, and he has a company called Anderson Brothers Outdoors or ABO Outfitters, and they have an online store. You can find their products, videos, and more online.”

The full interview with Hanson can be heard by clicking below –

49.75 Musky on the Bigtooth Tackle Juice Bucktail
Load more
1 of 3