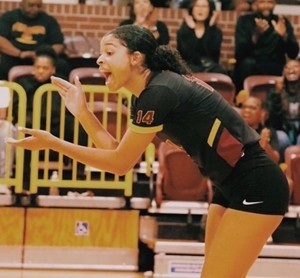 Whitaker played two years at Bethune-Cookman University, a member of NCAA Division I and the Mid-Eastern Athletic Conference, located in Daytona Beach, Fla. Whitaker played in 19 matches as a sophomore, with one start for the Wildcats. Whitaker had nine kills as a sophomore. She added 13 service aces during her second season with the Wildcats. Whitaker averaged 1.46 digs per set as a sophomore. During her freshman season, she appeared in all 32 matches with 69 kills for the Wildcats. She was fourth on the team in digs with 217 and third in service aces with 22. She had seven double-figure dig matches, including 15 vs. Jackson State University. Whitaker had nine kills in her college debut versus Texas Southern. She played high school volleyball at Ola H.S., helping her squad reach the Sweet 16 in the Georgia State tournament. She was an All-State performer, posting 437 kills and 323 digs as a senior. She was the Henry County Co-Player of the Year. Whitaker served as team captain for Ola H.S. She was a two-time team Most Valuable Player.  “We are excited to add Skyla to our program, she will be a great addition to our team, university, and community,” said Head Coach Sarah Rauen. “Skyla’s physical skills will allow her to compete at a high level in our gym and conference, and as we got to know her it is clear she will fit in well with our program and University. We can’t wait to get her to Minnesota and in the classroom and our gym!”
Whitaker was born Feb. 24, 2000. She is the daughter of Lee and Lisette Whitaker.