Longtime KROX Radio announcer, Mark Anderson, passed away Tuesday morning after arriving for work. Just before 6:00 a.m., he called paramedics as he was having a hard time breathing.  He went to the hospital and KROX received a call during the 8:00 a.m. hour that he had passed away.  “We are shocked and devastated by the 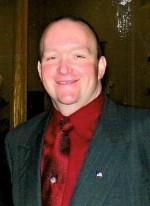 news,” said KROX owner Chris Fee.  “Our thoughts and prayers are with Sue and the family in this tough time.  KROX is like a family and Mark had been with us for a long time…he loved working here.  We are going to miss him.  It has been a tough morning.”

Mark had worked for KROX Radio on and off over the years as a part-time announcer and for the past handful of years, he worked as the morning announcer.  “Mark was always willing to do whatever was needed,” added Fee.  “He was loved by many listeners and found a way to make the best out of tough situations and always had a joke to try to make the mood lighter.”

Mark was born at Crookston on December 15, 1966, one of 7 children of the union of Verne Lyle and Harriet Estelle (Desautel) Anderson. He was baptized and confirmed at the Cathedral of the Immaculate Conception and educated in Crookston schools. Mark participated in several TEC retreats at Cathedral and while in high school excelled as a member of the speech team, winning many awards during those years. Following his graduation from Central High School with the Class of 1985, Mark went on to attend the School of Communication and Broadcasting in Kansas City. He later moved a bit closer to home to attend St. Cloud State University and then returned to Crookston. Most of Mark’s life centered around announcing for KROX. This dates back to part-time duties during his high school years and continuing on through his times of employment with various Crookston businesses including: the Northland Bowling Alley, Crookston Arena, working security for American Crystal Sugar, serving as a juvenile officer for Tri-County Corrections, providing customer service at the Agassiz Library, and while in pursuit of a degree in Computer Science from UMC. Many years ago he became the early morning ‘Voice of the Valley’ everyone woke up to and the host of many familiar features including swap shop, the fishing report, and especially his intelligently delivered interviews with leaders from all walks of local life, as well as good-natured banter with his colleagues at KROX.

Many years ago Mark met a young lady from Crookston by the name of Susan Jane Sprague at Crookston’s softball diamond 1. From those first moments blossomed good things meant to last a lifetime, including wedding vows they exchanged on May 30, 1992. In the coming years Mark and Sue would be blessed with 3 children: Casey, Christian, and Courtney, whom they raised in a home full of love and laughter.

Mark was a member of Crookston Eagles Aerie #873, and a “Trekkie”, passionate about all things “Star Trek”. He grew up as a Boy Scout and was proud to later provide adult leadership to a troop that included his son, Christian. It was no secret that Mark was at heart a comedian and he made several successful appearances during open-mic nights at the Comedy Club in Grand Forks. He was known throughout town for his corny jokes and dry sense of humor, often times eliciting a groan or an eye roll from his children.

Mark was taken all to soon from Sue, his beloved wife and best friend for over 28 years; their 3 children: Casey, Christian, and Courtney Anderson, all of Crookston, and Brittany Sinjem who Mark often referred to as his “adopted daughter,” also of Crookston; 4 grandchildren, 2-year old, Nolan Gray, and 3 boys whom Mark met through his daughter Casey that he thought of as grandsons: Gavin Salem of Crookston, Connor Moran now living in Dayton, OH, and Seth Cabrera also of Crookston.  Mark is also survived by his 3 sisters and 3 brothers: Sharon Lanctot of Crookston, Beth Lee of Fertile, MN, Sheila and Dennis Thull of Freeport, MN, Mike and Cindy Anderson of Ramsey, MN, Bruce and Mary Anderson of St. Michael, MN, and Patrick and Chanon Anderson of Sabin, MN; and from Sue’s family her siblings: Tim and Ginger Sprague of Grand Forks, ND, Julie Sprague and partner, Earl Weaver, of Crookston, and Tony Sprague of Crookston; his uncle and aunt, Marloe and Sylvia Anderson of Bloomington, MN; and many nieces, nephews, other relatives, and friends. He was preceded in death by his parents, Verne and Harriet; parents-in-law, Russ and Mavis Sprague; brothers-in-law, Robert Lanctot and Greg Lee; and Godson, Timothy Lee. Mark’s memory will be forever treasured by all who were part of his life.

Mark’s life will be celebrated at a Memorial Service to be held at 4:00pm, Monday, June 1, 2020, at Crookston’s Softball Diamond 1 where he first met Sue, located next to the shelter and water park near the Villa St. Vincent and Cathedral. Trey Everett will officiate. All are invited to bring lawn chairs to be arranged around the perimeter of the infield. Social distancing rules will apply and masks are recommended. Registration will be for one hour prior to the service. The Stenshoel-Houske Funeral Home is assisting with funeral arrangements.