KROX’s new afternoon announcer and sports announcer, Tommy Rezac, started on at the station on Monday, April 20.  Rezac will fill the Monday through Friday 11 a.m. – 4 p.m. air shift on KROX and handle play-by-play duties for UMC 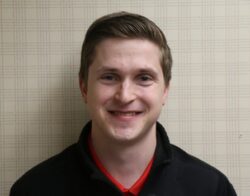 Rezac is originally from Valparaiso, NE, said he’s excited to be at KROX.  “Really excited to be here,” said Rezac. “What brought me here was really about Chris (Fee, owner of KROX), talked about.  I saw this job opening back in mid-January, talking about being the lead voice for the University of Minnesota Crookston athletics on top of doing area varsity sports and being a host.  Incidentally, play-by-play and hosting, maybe someday sports talk hosting, is where I’d like to be.  And I thought this would be a great step toward that.  I like that the small-mid markets let you get your hands dirty and do a lot.  I thought that this would be a great opportunity to not only do play-by-play, do hosting and not run the show necessarily but get my hands dirty, have a big say in the programming, and be a presence in the community and with an NCAA university.  The more I heard, the more excited I got.  It seems like everybody in this area is familiar with and likes KROX. It seems like it’s a well-run organization, and I’ve heard from folks at the university.  They’ve been very supportive and welcoming, and are excited to get sports back as we all are.  So, yeah, I’m excited to embark on this.”

Rezac grew up on a third-generation farm, as the youngest of four before attending the University of Nebraska for broadcast journalism with an emphasis in sports communication.  Since graduating in 2017, he’s held positions with a couple of different organizations in eastern Nebraska, most recently with News Channel Nebraska, an organization with radio and television stations in southeastern Nebraska.  “In late summer 2018, I took a job with a network called News Channel Nebraska,” said Rezac.  “I worked for a couple of stations in cities called Fairbury and Beatrice, about an hour south of Lincoln.  I served there as the news and sports director covering local news for television and radio.  I also did local high school and college athletics on the radio as well.”

Rezac said he’s looking forward to meeting the people of Crookston the most.  “When I left Fairbury and Beatrice, I talked about what I’d miss the most was I’d miss the most was my relationships with the coaches, families, teachers, and students from that area,” said Rezac.  “But, I’m excited to make new relationships, forge new friendships in a different community, and learn about an area, geography I previously hadn’t know about.  I’ve traveled a fair amount in the United States, but this area, not so much.   Northwest Minnesota, it’s interesting.  Everyone I’ve interacted with so far has been very friendly, very welcoming. I am just looking forward to some new friendships, relationships, possibilities, opportunities, and still learning everything right now, getting settled in, but looking forward to a new challenge and adventure.  I hope to be here for at least a few years to be a presence, a source in the community that people can turn to or listen to when they need sports, entertainment, or information.  That’s the great thing about local radio, you’re really there to serve a community, and I look forward to serving this one.”