Saturday, April 18, was Julian Rodriguez’s 11th birthday.  He was bummed that he wasn’t able to have a party due to COVID-19, which meant no family, no friends, and he was feeling down in the dumps.  But Julian’s mom, Karla, asked friends and family to drive-by with a birthday shoutout, and with the help of a close friend, the Crookston Police Department arrived to take the surprise to a new level.

Gonzalez said she wanted to come up with some creative because they couldn’t have a normal party. “You all know we’re going through something difficult and we couldn’t exactly have a normal party,” said Gonzalez. “So, I had to come up with something a little bit creative.  I decided to call some friends and family and had them drive by with some signs to wish him a happy birthday.  And then I had a friend who works for the police station and asked if it would be possible to have them come by.  And she came through for me, so it worked out.”

Julian said he wasn’t too disappointing not to have a birthday because of his mom putting together a special surprise for him, even if it was a little scary at first. “Well, it wasn’t that disappointing,” said Rodriguez.  “My mom is pretty special to me and she did all that stuff for me.  It was pretty surprising because I didn’t know that was going to happen.  It was pretty scary at first because I thought somebody was getting arrested.  I enjoyed it a lot.  All my family and friends came.”

While COVID-19 has put a damper on many things we’re used to enjoying, Crookston Police Department officers Don Rasicot and Shane Mendez, along with friends and family of Julian were able to give him a memory he will never forget. 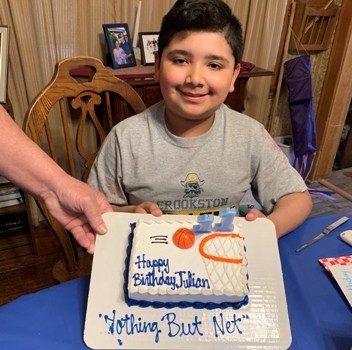