MaryAnn Simmons, 81, of Crookston, MN, passed away Saturday evening, April 11, 2020, at her rural home while comforted by her family at her 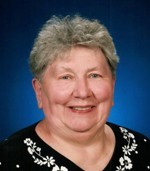 bedside. MaryAnn was recently diagnosed with advanced cancer and remained alert and involved in daily life until she passed.

MaryAnn was born in Fargo, ND on January 10, 1939, the daughter of John and Leona (Kukowski) Jereszek. She grew up on the family farm near Felton, MN, was baptized and confirmed in the Catholic faith.  She graduated from Felton High School in 1956. MaryAnn was the first in her family to attend college at Moorhead (MN) State Teachers’ College and earning her Bachelor’s Degree in Journalism from the University of North Dakota in 1960 where she was president of McVey Hall. MaryAnn then moved to Crookston and began her career with KROX Radio. She was united in marriage on May 29, 1961 to Donald Simmons of Crookston. Together they farmed on their “Century Farm” in Russia Township. Together they had 3 children: Jerome, DeAnn, and Monica.

MaryAnn continued her career while raising her children. She worked for the Northwest Mental Health Center and 10 years later she was a writer and reporter for the Red River Scene Newspaper. MaryAnn and Don were active in the National Farmers Organization where she served as secretary of the 7th District National Farmers Organization as well as editor and publisher of the National Farmers Organization Newsletter.  In 1987, MaryAnn returned to KROX as a news and feature reporter and news director. She was rarely found without her tape recorder prepared for any possible situation. She enjoyed county, city council, UMC, and school board meetings, writing her MaryAnn’s Maze column and interviewing for Focus on Education were some of her favorites. She interviewed many notable political leaders and others devoted to community service.  After over 30 years of services she retired weeks before turning 80 in December 2018 where she was honored at her final meeting as being named 6th district Polk County Commissioner.

She worked with many community organizations, including board memberships and committees at Villa St. Vincent, Northwestern Mental Health Center, St. Anne’s Church, Crookston Pirate Boosters, Russia Township, CHS Hall of Fame, Red Lake Watershed District, Polk County and the University of Minnesota-Crookston. She currently served on 2 of these boards until present day. She was honored with many awards during her lifetime with some of the most meaningful being UMC Torch and Shield, Crookston Public Schools’ Partners in Education. She also appreciated the community services of the Crookston Fire Department.

Sadly, Don passed away unexpectantly of a heart attack on September 19, 1992. However she continued to enjoy the family farm and was happy to spend her final days there. MaryAnn was a devoted member of the Cathedral of the Immaculate Conception parish. She had many friendships through her church community. She rarely missed church even braving blizzard conditions.

MaryAnn was an avid sports fan and would find any excuse to watch. Some of her favorites included MN Twins, MN Gophers, NDSU, Minnesota State-Moorhead, Notre Dame, Marquette, and St. John’s University. She was a supporter of Crookston Pirate sports events, not only as a reporter, but supporter of her kids and grandkids. She rarely missed any of their sporting events and her cheers could be heard above all.

In addition to Don, her beloved husband and best friend for over 31 years, she was preceded in death by her parents, John and Leona Jereszek; parents-in-law, William and Zelda Simmons;  sister-in-law and brother-in-law, Betty and Charles Moe.

A Mass of Christian Burial honoring MaryAnn’s life will be held at the Cathedral of the Immaculate Conception after the COVID-19 restrictions have passed. Burial will be in the Calvary Cemetery, Crookston.