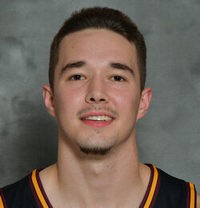 Cleary ended his career at Minnesota Crookston holding the school records for points, assists, three-pointers made, three-pointer attempted, field goals made, field goals attempted, free throws made, free throws attempted, free throw percentage, games played, and games started. Cleary is the NSIC’s All-Time Leading Scorer with 2,107 career points in conference play. In addition, he is 16th all-time in NCAA Division II scoring with 2,846 career points and is the highest-scoring player in NCAA Division II since 1992. Cleary has earned All-NSIC accolades all four years at Minnesota Crookston. He is a three-time D2CCA All-Region Selection. As a senior, Cleary ended the season fourth in NCAA Division II scoring with 26.6 points per game. He was eighth in the nation for free throw percentage at 90.8 percent. In addition, he was sixth in NCAA Division II for total points with 771. Cleary shot 38.9 percent from beyond the arc, and also tallied 4.2 assists per game.