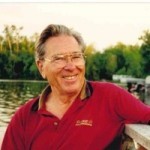 Deo was born May 30, 1929 in Cummings, North Dakota to Carl and Mabel (Doeden) Munter of Buxton, North Dakota. Deo attended school in Climax, Minnesota and enlisted in the U S Air Force during the Korean War. He was united in marriage to Florence Clausen in 1950. They lived in Gettysburg, South Dakota, Shelly, Minnesota, and Ada, Minnesota.

He was the owner of Munter Motor Service, an authorized Case Implement dealership for 25 years, and also owned the SnoJet snowmobile and Bolens dealerships.

He sold this dealership in 1980 and continued as an implement salesman throughout the local area until he retired. He moved to Mesa, Arizona in 2000 and returned to Ada in 2017.

His interests were many. They included time with family and friends, spending time at White Earth Lake, singing karaoke, golfing, traveling, flying airplanes, cards, and dancing to name a few. He kept up with current events and was active in the church, church youth groups, Jaycees, Elks, Eagles, American Legion, VFW, Shelly Fire Department, firearm and snowmobile safety programs, airplaine authority, Norman County Rescue Squad, and was a member of the Ada City Council.

May God bless the memory of Deo Munter.

Visitation: Monday, March 2, 2020 from 5:00PM to7:00PM with a prayer service at 6:30 PM, at Fredrikson-Ganje Funeral Home in Ada, and one hour before the funeral at the church on Tuesday.