Betty Lou Morvig (Avelsgaard), 93, of Fertile, MN, left her earthly home peacefully with family by her side on January 31, 2020. 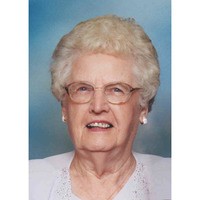 Betty was born November 13, 1926 to Melvin and Edna (Keifer) Avelsgaard in Crookston, MN. She was one of 6 children having one brother and four sisters. Betty attended school in Crookston, MN alongside her siblings. As a child, Betty perfected her harmonica playing skills and continued to entertain family and friends with her musical renditions of songs. Betty also enjoyed singing, and as a teenager would sing with her sisters on the Crookston radio station. By the time she entered the workforce, Betty became a waitress at several establishments including Woolworth’s Dime Store, Northland Inn Restaurant, Robert’s Restaurant and the Fertile Pool Hall. Betty enjoyed her work and the opportunity it provided her to socialize with friends new and old.

Betty met the love of her life, Chester Morvig, at a dance in Euclid, MN. Chester couldn’t keep his eyes off of her and shortly after they first met, their courtship began. On October 5, 1946, Betty and Chester were united in marriage in Fertile, MN. After they married, Chester and Betty moved onto the Morvig family farm 3 miles east of Fertile, where they worked together until retiring from farming in 1981, after 35 years. They were blessed with five children: Sandra, David, LaVonne, Donald, and Sylvia.

Betty spent a majority of her time in the kitchen cooking and baking. Her children could always count on coming home to the smells of freshly made bread and other treats including her “Never Fails Caramel Candy” and angel food cake. She would enter her baking delights yearly at the Polk County Fertile Fair, often times taking home several awards for her delicious creations. Betty was also avidly involved with the Concordia Church WELCA bible study, ‘Red Hatters’, the women’s exercise group, and was a RSVP driver. Betty also took delight watching her children, grandchildren, and great-grandchildren grow. She would attend as many school events, birthday parties, anniversaries, and family gatherings as possible. She often wrote letters or drew pictures to mail to her grandchildren (most notable were her handmade Valentine’s doily cutouts).

In January 2012 Betty and Chester moved to Poplar Meadows Assisted Living, McIntosh, MN where they lived until moving to Fair Meadow Nursing Home in June of 2015. They celebrated an impressive 69 years of wedded bliss in October of 2015 at Fair Meadow Nursing Home with family and friends. Betty’s beloved husband Chester preceded her in death on April 22, 2016 at 98 years old.

Betty had a heart of gold and always welcomed family and friends with a smile, a hug, and witty remark. She was a loving and devoted Christian, amazing wife, sister, mother, mother-in-law, grandmother, great-grandmother, friend, and so much more. Her fun-loving nature and infectious laugh will be greatly missed by everyone who knew her.

Inurnment will be at a later date in Concordia Lutheran Cemetery, Fertile, MN.