The KROX Athlete of the Week is University of Minnesota Crookston Golden Eagle Men’s Basketball player,Harrison Cleary, a 6’1 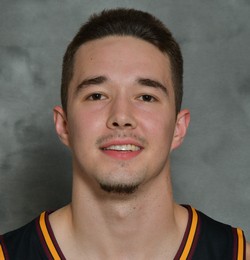 Senior point guard, from Oak Creek, Wisconsin. This past weekend, he became the NSIC’s all-time leading scorer with 1,955 points in conference play during his career. Cleary also became the state of Minnesota’s career scoring leader earlier this season having scored 2,681 points during his career with the Golden Eagles, the most of any player to ever attend a Minnesota college. “It was a special moment,” said Minnesota Crookston head coach Dan Weisse. “The fact that he was able to break the conference scoring record was the culmination of all the work he’s put in when people are not watching. He’s always in the gym with a basketball working on his game. We’re so proud of him and now every time he scoreshe’s going to break a record and hopefully we get some wins on top of it.”


Last season, Cleary scored 734 points, breaking his own single-season school scoring record for the second-straight season. Cleary was named All-NSIC first team for the second straight season.  During Cleary’s sophomore season, Cleary scored 702 points, breaking his own UMC single-season scoring record while earning All-NSIC first team honrors. Cleary started his college career with an impressive debut season scoring 640, a new UMC single-season scoring record, while also earning NSIC Freshman of the year and All-NSIC second team honors.In high school, Cleary was a two-time First Team All-Southeast Conference pick as a junior and senior and was named conference player of the year as a senior.  He also earned First Team All-Suburban as a junior and was an All-State Honorable Mention pick as a senior.
Cleary is the all-time leading scorer and is second all-time in assists at Oak Creek H.S.
As a senior, he scored 19 points per game and as a junior he averaged 20 points, 5 rebounds and 2 assists per game.  He served as a team captain for three seasons.
He was also an honor roll student every semester of high school.

Part of your game that needs work – Limiting turnovers

Do you have a pre-game ritual – Eat Subway

What music are you listening to – Drake, Da Baby

You’re stranded on a deserted island and you can have ANY three people with you – Kevin Hart, Bear Grylls, Selena Gomez