The KROX Athlete of the week is Ethan Bowman, a 5’6, 117-pound freshman that is coming off his first varsity tournament championship after winning the 62nd Skip Nalan tournament in Grand Rapids last weekend.  Ethan won all four of his matches.  He won his first two matches by pin before winning his semi-final match 14-3.  In the championship, he won by pin in the third period to win the 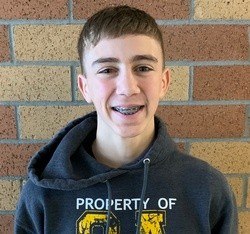 championship.  Ethan improves to 27-7 on the year and is ranked #7 in the state at 113 pounds. His career record in a little over two years is already at 58-23.
“At his point in the season, Ethan is a strong candidate for most dedicated. He has worked extremely hard to prepare for this season and it has paid off. At the completion of practice, Ethan will typically stay in the practice room and work on his technique. You can also find him wrestling and strength training most mornings before school. He diligently watches and re-watches every match he competes in during the season and looks for ways to improve,” said Pirate Wrestling Coach Wes Hanson. “Ethan is a competitor and has a knack for finding ways to win critical matches. Every time he steps on the mat I know he will work his absolute hardest the entire six minutes or whatever it takes to win. His season has been highlighted by an impressive 3rd place finish at the Big Bear Tournament and now a first-place finish at Grand Rapids.”
Ethan has wrestled at 106 pounds and 113 pounds.  He has been a three-sport athlete while playing football and baseball.
In the fall, Ethan is a running back and safety on the football team.  He will be looked at to be a big part of the varsity team for the next three years.  He played baseball last spring and is leaning towards doing some more wrestling this spring.
Ethan is also on the honor roll.

The best part of your game –  On top

Part of your game still needs work –  On the bottom

What music are you listening to – Rap

You’re stranded on a deserted island and you can have ANY three people with you – Coach Hanson, Colton Weiland, and Zach Brown

Plans after graduation –  Go to school somewhere and hopefully wrestle