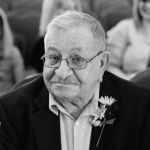 Mass of Christian burial will be held on Monday January 27, 2020 at 11:00 AM at St. Joseph Catholic Church in Red Lake Falls with Father Bob Schreiner Officiating and Deacon John Bruggeman. Burial will be held at St. Anthony Catholic Cemetery, Terrebonne, MN at a later date.

Visitation will be held on Monday one hour prior to the service at the church.

Vernon Joseph Elmer Reopelle was born October 29, 1939 at Red Lake Falls, MN son of Ildage and Alma (Fournier) Reopelle.  He was raised in the Terrebonne area and attended Lafayette High School graduating in 1957.  On January 23, 1958 Vern entered the U.S. Air Force and served his country until his honorable discharge in May 31, 1962.

On February 16, 1963 he was united in marriage to Idabel Hawes at Most Holy Rosary Catholic Church in Stanley, ND.  To this union 3 children were born Michelle, Robert and Jason.  Vern worked for the Great Northern Railroad and later for the Burlington Northern Railroad as the signal maintainer.  The couple lived in various places and Minnesota and North Dakota with the last several years in Minot, ND before Vern retired from the Railroad in September 1, 2002.  They moved to Red Lake Falls in 2011 and East Grand Forks, MN in September of 2019 where they have since resided.

Vern enjoyed camping, fishing, playing cards, and gardening.  He was a member of the Brotherhood of Railroad Signalmen.  He was also member of the Red Lake Falls American Legion.