Henry John Jeuch, 80, of Euclid, MN, passed away late Saturday evening, January 18, 2020, at the Villa St. Vincent in Crookston. Henry had been resident of the Villa since December 5th of 2019. 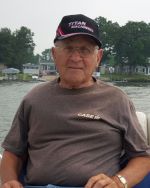 Born on February 7, 1939 at Crookston, MN, Henry was the oldest of three children of John and Frances (Zhorela) Jeuch. He grew up on the family farm in Euclid Township, near Euclid, MN, and was baptized and confirmed at St. Mary’s Catholic Church where he was a lifelong member. Henry was educated at the Goosen one-room country school located a mile down the road from their farm. Throughout his life he worked on the farm with his father and later on his own. Henry also held other seasonal jobs including employment with King of Spuds in East Grand Forks from 1957-62; American Crystal Sugar from 1962-66; and Dunleavy Concrete Inc. in Grand Forks from 1966-73. In 1973 Henry began working for Reiten and Young International Harvester in Grand Forks, today known as Titan Machinery, as a tractor mechanic. He was a very good at what he did and enjoyed a long and successful career until retiring in 2001. Henry was united in marriage to Julie Ann Peterson on June 20, 1970 at Faith Lutheran Church in Mentor, MN. The couple made their home in East Grand Forks and to their union two children, Karen and Shawn, were born. In 1978 Henry and Julie moved to the farm near Euclid. They later divorced.

Henry’s hobbies and favorite pastimes included working on his cars and tractors, and riding his 4-wheeler. Most important in his life was his family and he loved spending time with them. Henry’s granddaughters, Savannah and Lexi, captured his heart and put a twinkle in his eye. Seventeen year-old Savannah was very active in figure skating, horse-back riding, and dance when she was younger, and Henry never missed a chance to watch her participate and perform. Six year-old Lexy was still a bit young and just beginning to discover what path her interests would take. Nonetheless, Henry was looking forward to being a part of whatever that might be.

Henry is lovingly survived by his daughter and son-in-law, Karen and Rick Meine of Crookston, MN; son and daughter-in-law, Shawn and  Becky (Krenzel) Jeuch of Euclid, MN; two granddaughters, Savannah Meine and Lexi Jeuch; brother and sister-in-law, William “Billy” and Susan Jeuch of Euclid; sister, Darlene Kenmir of Crookston; and several nieces, nephews, cousins, and friends. He was preceded in death by his parents, John and Frances; grandparents, John and Elizabeth Jeuch Sr. and Joe and Nettie Zhorela; and brother-in-law, Gary Kenmir, who passed away on August 21, 2019. May the memory of Henry John Jeuch be forever treasured.

A Memorial Mass honoring Henry’s life will be held at 10:30am, Monday, January 27, 2020, at St. Mary’s Catholic Church in Euclid, with The Rev. Gerold Anthony, presiding. Visitation will be at the Stenshoel-Houske Funeral Home on Sunday from 5-7PM, with a 7PM prayer service, and will continue at the church on Monday for one hour prior to the funeral. Inurnment will take place in the Prairie View Cemetery, rural Euclid.