Dale LeRoy Myerchin, 79 of Crookston, MN, passed away peacefully on Saturday, January 18, 2020 at the Villa St. Vincent with family by his side. 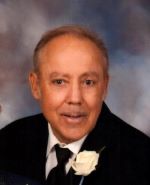 Dale was born on June 14, 1940 in Grand Forks, ND, the third of ten children of the union of Walter and Mildred (Jeffrey) Myerchin.  He grew up in Warren, MN and attended school there until the family moved to Crookston, MN in 1955.  Dale graduated from Crookston’s Northwest School of Agriculture in 1958. He lived and worked in the Twin Cities, as well as East Grand Forks, MN.  During this time he also served his country as member of the US Army National Guard.   On December 5, 1964 Dale was united in marriage to Jean Marie Danielson, at the Sacred Heart Catholic church in East Grand Forks.  They were blessed by the births of three children:  Susan, Michele and Steven.  Dale began working in Fergus Falls, MN for Otter Tail Power Company in 1968 as an apprentice lineman.  He later moved to Crookston, Erskine and back to Crookston continuing to work for OTP as a Service Representative. He was very proud of and enjoyed his career with Otter Tail Power Company.

While the family lived in Erskine, Dale was active in several community and service organizations as well as the church they belonged to at the time, St. Lawrence Catholic Church in Mentor, MN.  After returning to Crookston, they were members of Cathedral of the Immaculate Conception.  He held past memberships in the Dawn to Dusk Lions, Crookston American Legion Post and Eagles Aerie.

Dale and Jean loved spending time with their kids and grandkids, attending their school events and activities.  He looked forward to his annual fishing trip to Lake of the Woods with Sheldon, Don, Jerome, Jerald, Jack & Denny.  There are many stories of the practical jokes the Botko twins and Dale played on each other over many years.

Dale suffered a massive stroke while on a family vacation to Vail, CO in November of 1995. Unfortunately, he was unable to return to work and he officially retired in 2005. Sadly, Jean passed away in Nov of 2009.  Soon after Dale moved into The Summit Assisted Living apartments and eventually became a resident of the Villa St Vincent.  He enjoyed visiting and getting to know fellow residents and is remembered for coming up with nicknames for many of the Villa staff members.

The funeral service for Dale Myerchin will be held at 2:30 pm, Friday, January 24, 2020, at the Cathedral of the Immaculate Conception in Crookston with The Very Rev. Vincent Miller, presiding.   Visitation will be at Stenshoel-Houske Funeral Home on Thursday from 5-7:00 pm, with a 7:00 pm prayer service, and at the Cathedral for one hour prior to the funeral. Military Honors will be provided by the Crookston Veterans Council and the MN National Guard Honors Team from Moorhead.  Cremation has taken place. Inurnment will take place in Calvary Cemetery in the spring.