Laurie Ann (Meyer) Benoit, 57, died on Wednesday, January 15, 2020, peacefully surrounded by loved ones in the comfort of her Crookston, MN home.

Laurie was born on July 9th of 1962 at Bethesda Hospital in Crookston MN, the daughter of Henry and Norma (Sylvester) Meyer. Laurie was raised on the family farm near Crookston with eight other siblings.  Growing up she was known for her wild imagination and sense of 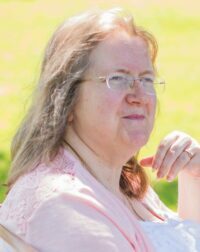 adventure. Laurie attended Crookston High School, graduating in 1980. After high school she continued to work on the farm and also as a housekeeper at Villa St. Vincent Nursing Home. She later met Brian Benoit and as their friendship became love Laurie and Brian were united in marriage on June 6,1987 at Grace Lutheran Church in Crookston. Together, they raised three wonderful children and Laurie considered herself to be blessed to be a stay at home Mom. In 1997, at the age of thirty-six, she defied all odds and became a cancer survivor. After her kids were grown and on their own she became a caretaker for her mother, Norma Swenson. Throughout her life she remained dedicated to her faith, her friends, and most of all her family.

Laurie was known for her silly sense of humor, her kindness, and her ability to bring people together. She had a love of gardening, horses, drawing, music, baking, and canning with family and friends. She loved laughing and joking; there was many a late night spent in her kitchen with family, giggling and eating sweets. Later in life she enjoyed every moment with her three grandchildren, spoiling them with candy and teaching them her humor.

Preceding her in death are her grandparents, George and Geneva Seaton and Theodore and Marie Meyer; parents, Norma and Henry; step-father, Carl Swenson; parents-in-law, Florence and Ray Benoit; and her brother, Norman Meyer, who passed away on August 7, 2019.

She is loved and will be sorely missed until we meet her again in our heavenly home, or as Laurie would say, “see you in the funnies”. May God richly bless the memory of Laurie Ann Benoit.

A Funeral Service for Laurie will be celebrated at the Grace Lutheran Church in Crookston, MN, at 11:00 am, Monday, January 20, 2020, with Pastor Noah Thompson, officiating. Visitation will be at the Stenshoel-Houske Funeral Home on Sunday, January 19 from 5:00 pm – 7:00 pm, with a 7:00 pm prayer service, and will continue at the church for one hour prior to the funeral. Interment will be at the Calvary Cemetery in Crookston, MN, in the spring.