The athlete of the week is Crookston Pirate Boy’s hockey player, Jack Doda, a freshman center/wing that leads the team in scoring.
Jack leads the team in goals with 14, almost triple the total of the next top Pirate scorer.  He is extremely dangerous when it comes to special teams with six 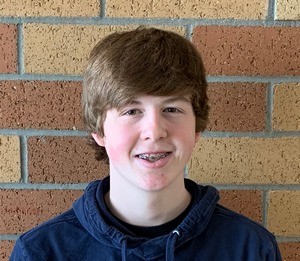 power-play goals and three short-handed goals.  He is also second on the team with six assists (so he has an assist on half the goals scored by his teammates).
Over the past two weeks, Jack recorded two goals in a 3-2 loss to Bemidji.  He had four goals and two assists in a 7-2 victory at Park Rapids, and he added an assist on the lone Pirate goal in a 4-1 loss to Detroit Lakes. “He is starting to come into his own with his confidence.  He is only a ninth-grader, but he knows he can compete at this level,” said Pirate Coach Josh Hardy. “Getting four goals the other game is fun to see.  You listen to his comments after the game and he is humble.  He has tons of skill, he works hard, and a good attitude.  He is a great kid to have on the team.”
Jack is in his second year of playing varsity hockey and was named the Pirate Rookie of the Year last year. He will be one of the top players in Section 8A over the next three-plus years.
Jack is a three-sport athlete and played football in the fall and will play baseball in the spring.
In football, he plays defensive back and quarterback and played his first year of varsity this past fall.
In baseball, he is a pitcher and infielder and played on the junior varsity team last year and is hoping to make the varsity line up this spring.
Jack is also in the Crookston High School band.

The best part of your game –  My passing

Part of your game that still needs work – Physical play

Do you have a pre-game ritual – Listen to music

What music are you listening to – Rock

You are stranded on a deserted island and you can have ANY three people with you – My mom, my dad, and The Rock.

Plans after graduation –  Hope to go to college somewhere