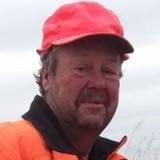 Gerald W. Chisholm was born August 2, 1957 in Ada, MN, the son of Robert and Gladys (Noll) Chisholm.  He was raised on the family farm near Gary and attended school there.  Jerry graduated from the Gary High School with the class of 1975 after which he attended Detroit Lakes Technical School where he studied the culinary arts. Once he completed his education, he became a chef in several restaurants including The Biltmore and Erie Jr. Café.  Jerry loved cooking and greatly enjoyed interacting with his co-workers.  In 1986, he was able to return to farming, which was his true love. Over the years, Jerry continued to acquire land and build up his grain farming operation to where it was today.  Farming was definitely  something Jerry was good at and he was proud that he could live “the farmers life.”  He had other interests which included hunting, fishing, woodworking and well as riding his Harley, his 4-wheeler, or flying his ultra-light plane… but none of these could keep him away from the farm but for a few days.  As Jerry would put it “his best therapy was when he was in his excavator.”  Jerry always had a dog and loved each of them, but especially close to his heart was his current canine companion “Radar” who was constantly by his side. Jerry had also served on the board at the Gary Farmers Union and the Township boards.

Jerry is survived by three brothers: Al (Peggie), Pat (Penny) and Joe all of Gary; two sisters, Susan (Jim) Greene of Dilworth, MN and Mary Chisholm of Sabin, MN; one sister in law, Patty Chisholm of Peqout Lakes, MN, and many nieces and nephews, holding a special relationship with Nick Paul, who was part of his farming operation. He was preceded in death by his parents; one brother, Dan; one great nephew, Linden Halverson and one nephew, Nathan.