ADVERTISE YOUR BUSINESS HERE | EMAIL: CHRISJFEE@YAHOO.COM
Share on FacebookShare on TwitterShare on LinkedinShare on Pinterest
The Crookston Blue Line Club has released another Crookston Youth Hockey report for the past week.  Check out how the Crookston youth hockey teams are doing below –
SQUIRT
This last week we had our Crookston Squirt B Tournament (Nov29-Dec1).  We started the Tournament on Friday and played TRF Blue, despite losing that game 8-11 we played good overall.  Grant Funk & Camren Duncan both had hat tricks and Hudson Rick got 2 goals in that game.
Saturday morning, we played TRF Black.  We came out on the ice ready to play and got a nice win 11-9. Scoring goals in that game were Noah Chandler, Camren Duncan, Hudson Rick(2), and Grant Funk(7).  Saturday afternoon, we played Manvel Freeze and we continued with our momentum from the previous game and took our 2nd win 8-6. Scoring goals in that game were Camren Duncan, Hudson Rick(3) and Grant Funk(4).
Sunday Morning, we played the North Stars Black and came up with a big win 19-3. Colin Trudeau was in net for most of the game and made a couple of really nice saves!  The goals scored in the game came from Rowan Benoit, Jaret Mattson(2), Camren Duncan(4), Hudson Rick(4), and Grant Funk(8). With that win, we went on to play TRF Black again for 3rd place.  In the 1st period, Grant Funk and Caden Perry each put a goal on the board, but TRF was able to slip 4 in the net.  In the 2nd period, Grant Funk put 2 more in, and Camren Duncan added one more.  TRF was only able to get 1 in the 2nd, so we were tied up 5-5 at the end of the 2nd.  In the 3rd period, Camren Duncan put another goal in, and with 45 seconds left in the game, TRF was able to tie it up and send us to overtime.  We played a 3 on 3 overtime that was quite exciting to say the least, with action on all ends of the ice and Tony Elbinger made some heart-pounding saves.  With 45 seconds left in the game, Grant Funk found the back of the net!  The boys put in the effort and walked out of the CSC with a 3rd place medal around their necks!  We had a fun and well run tournament right in our home town!  Thanks to all the parents and staff that help make this tournament a great success!
Player of the Week – Grant Funk.  Grant is a solid, all business hockey player who shows leadership on and off the ice. He was able to pop in 26 goals in our 5 games we played this weekend, including the overtime goal for 3rd place. Congratulations Grant!
PEEWEE A
The PeeWee A’s bounced back after a string of losses for their first win of the season against Little Falls on Saturday, 5-3.  This was a great team win with every player putting forth their best effort of the season.  Brady Chandler had a strong game in net and after the first period ended 0-0 we were pleased to see goals scored by our forwards and our defensemen to pull out the win.
The PeeWee A team will be doing their northern swing this coming weekend taking on Baudette, Warroad, and Roseau.

PEEWEE B
PeeWee B team faced off against East Grand Forks (Green) on Friday afternoon, Crookston skated hard but eventually, EGF wore us down. Scoring for Crookston was Gavin Aakhus (J Buhler – assist) and Isaiah Donarski in the 10-2 defeat.
The boys were on the ice again Sunday afternoon up in Roseau. These teams are very evenly matched, Crookston struggled to maintain offensive pressure and struggled to find the back of the net.  Crookston ended up falling to Roseau 4-1, scoring for Crookston was Isaiah Donarski when he evened up the score 1-1 late in the second period.
Player of the Week Isaiah Donarski – Isaiah has played hard all season and seems to know exactly when to jump in the play to create an offensive spark.  The bench exploded in Roseau when Isaiah tied the game, his determination is contagious!
12U

The 12UA team attended their first tournament in Grand Forks this weekend.  They started off playing Minot on Friday, which was a very tight game.  Minot scored first, and the Pirates answered with two goals, ending the first period with the Pirates up 2-1.  Goals were scored by Addie Fee & Ashlyn Bailey in the first period.  Minot tied it up in the second, and Crookston’s Addie Fee answered just 52 seconds later, securing the lead again at 3-2.  The third period was a nail biter, but no scoring was done by either team, leaving the final score in the Pirates favor at 3-2.  Shots on net were not tracked for this game, but Natalie Longoria did a great job of guarding the net for the Pirates.

The girls played two games on Saturday, the first being against the Winnipeg Polar Bears.  The Pirates were able to secure a 6-0 lead after the first period and had a chance to work on passing, positioning, and getting more teammates an opportunity to score.  The final score was 13-0, with the following players scoring goals:  Karena Longoria (4), Emma LaPlante (3), Ashlyn Bailey (2), Addie Fee (2), and 1 goal each for Paige Abrahamson and Georgia Sanders.  Natalie Longoria had 6 saves on the game.

The second game on Saturday was against the West Fargo Stampede.  This game was much closer, and the girls worked very hard to try to get the win or tie, to secure a place in the Championship game on Sunday.  Emma LaPlante scored the first goal early in the game, with an assist from Addie Fee.  The Stampede then had 3 unanswered goals, before JoJo Wallace scored an unassisted goal in the 3rd period.  The Stampede scored one more goal on a power play, to make the score 2-4.  The Pirates were determined to stay in the game, and the coaches even pulled the Pirate goalie!  The Pirates had 2 waived off goals, and then Emma LaPlante scored again, with another assist from Addie Fee, to make the game 3-4.  This goal brought the face-off back to center ice, and the Pirates were ready to pull their goalie again to make every attempt at securing the tie, but they ran out of time and the final score was 3-4, with the Stampede moving on to the Championship game on Sunday.  Natalie Longoria was in net again, and she did an amazing job of keeping the Pirate ladies in such a close game – she had 25 saves against the West Fargo Stampede.

The Pirate girls went on to the third-place game and had to face one of their district rivals, the Roseau Rams.  The game was back & forth, and after the first period, it was still at 0-0.  Miryah Epema, assisted by JoJo Wallace, got the Pirate girls on the scoreboard, followed about a minute behind by Emma LaPlante, assisted by Georgia Sanders.  The Roseau Rams made some changes to their positioning mid-way through the second period, and things shifted for them quickly – the Rams scored 5 unanswered goals in the last 7 minutes of the period, ending the second period 2-5.  The Rams scored 1 more goal, early in the third period, and Addie Fee of the Pirates answered with an unassisted goal.  The Rams scored 3 more goals in the third to make the final score 3-9.  Natalie Longoria kept working hard against the Rams and made 18 saves in the game.  Keep working hard, ladies!

This upcoming weekend, the 12UB team plays in the Grand Forks 12UB tournament.  They begin the weekend on Friday, playing Shakopee at 1:15 p.m.  Then on Saturday, they will play Williston at 9:30 a.m., and the remainder of the weekend is TBD based on records.

12U Player of the Week:  Emma LaPlante.  Emma’s hard work and tenacity earned her 6 goals in the Grand Forks Angels tournament this past weekend. Emma plays hard – her back checks, net crashes, and face-offs are high energy and she catches opponents off guard. The adjustment to 12U has been fun for her and it shows on the ice.

BANTAM
The Crookston Bantams played in the Detroit Lakes tournament this past weekend taking 8th place. Friday night Crookston lost 11-5 to Eagan. Crookston kept the game close through the first 2 periods but Eagan pulled away in the 3rd. On Saturday, Crookston dropped a pair of games losing 12-1 to Blaine and 7-1 against St.Vital. On Sunday morning Crookston lost a heartbreaker in overtime to Greenway 2-1. Crookston gets back to work this week with a pair of home games this weekend against Bagley and Detroit Lakes.
Player of the Week:  Jackson Dauksavage
Jackson is the bantam goalie and the backbone of our team this year. Jackson comes to practice each week ready to work and play his hardest. Jackson faced a lot of tough shots this past weekend and came up with many big saves to keep us in games. Jackson played one of the best games of the year on Sunday against Greenway. We look forward to his continued hard work and improvement this season. 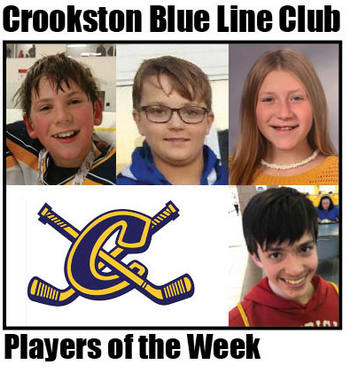 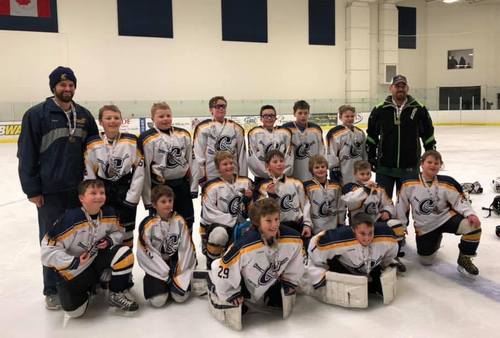