The KROX Athlete of the Week is University of Minnesota Crookston Golden Eagle football player, Tysen White, a 5’10, 175-pound freshman defensive back from McFarland, 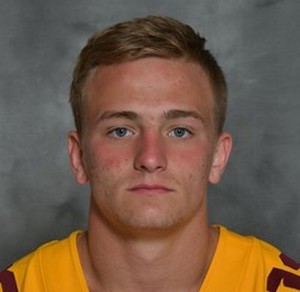 Wisconsin.
Tysen had 10 tackles in the game at Mary on Saturday.  He recorded six solo and four assisted tackles along with one pass break-up.  White had a tremendous freshman season as he was seemingly around the ball on every play.  He led the Golden Eagle defense with 82 tackles this season and also recorded 2.5 tackles for loss, two sacks along with one fumble recovery.  “Tysen has been a great addition to our program. As a freshman, he was able to pick up our playbook quickly and has a great knack for finding the football,” said UMC Coach Mark Dufner. “We are really excited about his future. The best is yet to come.”
Prior to UMC, White started at both running back and defensive back for McFarland High School. White rushed for 877 yards and 13 touchdowns as a senior while also making 96 tackles and two interceptions defensively. White was named All-Conference three times including once to the first team. He also earned All-Area honors at both defensive back and running back.

The best part of your game – My tackling ability and my football I.Q.

What do you need to improve – Size, strength, speed and technique/footwork at the Safety position

Do you have a pre-game ritual – Yes, visualization while listening to music about three hours ahead of game time. Watching film about 2 hours before kickoff.

Biggest thrill in your athletic career so far – My first football playoff game my senior year of high school, never been more excited and nervous in my life.

What music are you listening to – Hip Hop/ Rap and Country

Something about you that people don’t know – I have six dogs combined between my mom and my dad’s house.

You’re stranded on a deserted island and you can have ANY three people with you – Les Stroud from the TV show Survivor man, Cody Lundin (another Survival expert),  Elon Musk