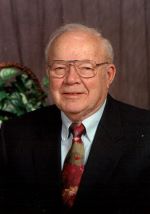 Jerry was born on December 7, 1920, in Buffalo Center, IA, the son of the late Manly and Ila (Mitterer) Claassen.  He grew up in Buffalo Center, IA, and graduated from high school in Geneva, IA, in 1938, and Iowa State University in 1942.  On February 2, 1943, he married Betty Helleen in St. Paul, MN.  He enlisted in the US Military and he and Betty lived in Fort Brag in Fayetteville, NC, Pine Camp in Watertown, NY, Camp Forrest in Tullahoma, TN, and Camp Shelby in Hattiesburg, MI.  He was then deployed to the European Theater during World War II and participated in the Battle of the Bulge and Bastogne.  Upon his discharge in 1946, Jerry began working for Crystal Sugar in Mason City, IA, and in 1958 he was transferred to Crookston, MN, as Agricultural Manager, a position he held until his retirement in 1986.  He was instrumental in developing a beet storage procedure to greatly improve factory operation and enabled longer processing operations.  Following his retirement from American Crystal, he was employed for 5 years with Transystems on a part-time basis.  He was a longtime member of Trinity Lutheran Church and American Legion Post #20 in Crookston, MN.

Visitation:  One Hour Before the Service