The KROX Athlete of the Week this week is Crookston Pirate Girls Swimmer, Madison Hoiland.  The sophomore finished sixth place in the 100 breaststroke and ninth place in the 50 freestyle while also placing ninth in the 200 Medley Relay and the 400 Freestyle relay at the Section 8A Swimming and Diving meet in Grand Rapids on Saturday.  Madison was able to cut five seconds off her 100 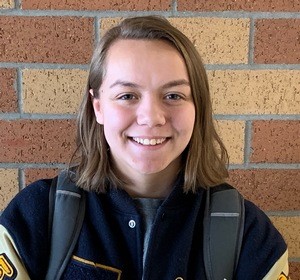 breaststroke time this year, which was a personal highlight of the season.
Madison had a great year winning the 100 breaststroke in several of the meets throughout the season.  She also finished first and second in the 50 freestyle in most of the meets this season.  Her hard work and determination have helped her become one of the top swimmers in northwest Minnesota.  “Madison continued to be impressive at the section meet.  For her to swim 1:17’s in the 100 breaststroke and to be able to drop it down to a 1:12 is impressive,” said Pirate Girls Swim Coach Marley Melbye.  “To be at the competitive level she has been at all year, it is tough to get the big time drops, and she worked hard and did it.  She had a great season and worked extremely hard for her success.”
Madison is a three-sport athlete and is also in basketball and track and field.  Madison has played basketball since Kindergarten and was part of the Pirate Girls Basketball team this winter that is coming off a Section 8AA runner-up finish last year.  In track, Madison runs the mile and also high jumps.  She has been a member of the Pirate track team since seventh grade.
Madison is also a member of the Crookston High School LEO Club, she plays the flute in the band and is a member of the A honor roll!

What music are you listening to –  Mostly country

You’re stranded on a deserted island, and you can have ANY three people with you – Mackenze Aamoth, Claire Oman, and Amanda Schultz