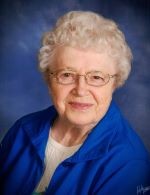 Center in Crookston, where she had been a resident since September of 2018.

Maxine was born at Eldred, MN on August 10, 1925, one of 6 children of the union of Henry and Irene (Wachter) Jobe. She was baptized on August 23, 1925 at Trinity Lutheran Church in Fisher, MN and confirmed at First English Lutheran Church in Eldred on May 29, 1938. She attended grade school in Eldred and graduated as Valedictorian of the Class of 1943 at Climax (MN) High School. On June 23, 1946 Maxine was united in marriage to Alvin Wagner at Our Savior’s Lutheran Church in Crookston. They were members of Trinity Lutheran Church in Fisher and farmed near Crookston until Alvin’s passing on September 22, 1976. Maxine moved from the farm to Crookston in 1978 and became a devoted member of Our Savior’s Lutheran Church in 1980, where she enjoyed singing with the Senior Choir. She was the Mission Chairperson of the Afternoon Guild for over 24 years and former secretary of the Guild and the Crookston Zone of the Lutheran Women’s Missionary League. For many years Maxine enjoyed putting together history scrapbooks for Our Savior’s and the Afternoon Guild. She was also very actively involved in the Variety Home Study Club, RiverView Health Auxiliary, and the Red River Valley Winter Shows Women’s Division.

Maxine was a wonderful gardener as evidenced by her beautiful flowers and abundant produce. She also made the best baby dill pickles. Another of Maxine’s passions was baking, and she was honored as a 4-time winner of the Farm Bureau Baking Contest. She always had baked goods on hand to share with her family, and a well-known candy drawer enjoyed by her grandchildren. Known affectionately as the ‘Queen of Divinity’ Maxine made and sold many of the best batches of divinity around. The holiday season was always a fun time of the year as she would make dozens of Christmas cookies for her family and friends. Maxine always treasured time with her grandchildren; whether it be playing games, telling stories, or feeding them mac and cheese and lots of chocolate!

In addition to Alvin, her beloved husband of 30 years, Maxine was preceded in death by her parents: Henry and Irene Jobe; parents-in-law, Amos and Martha Wagner; brothers, Eldo Jobe and wife, Emily, and Arlyn Jobe; sister, Laurice Holtz and husband Charlton “Bunny”; and brothers-in-law, Richard Zahler and Newman Hinkley. The memory of Maxine Emma Wagner will be treasured by all who were a part of her life.

The funeral service for Maxine Wagner will be held at 3:00 pm, Monday, October 14, 2019, in Our Savior’s Lutheran Church in Crookston with The Rev. Steve Bohler, officiating. Visitation will be at the church from 2-3:00 pm. Burial will take place in the Greenwood Cemetery, Fisher, MN at a later date.