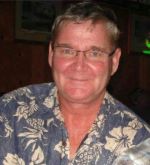 Thomas Charles “Tuna” Nimens, 66, of Scottsdale, AZ, passed away peacefully at his home on Saturday, September 7, 2019, while surrounded by his loving family.

He was born in Crookston on April 13, 1953, one of 6 children of the union of Wilfred “Bill” and Patricia “Pat” (Sullivan) Nimens. He grew up in Crookston, was baptized and confirmed at the Cathedral of the Immaculate Conception and graduated from Crookston Central High School in 1972. He was united in marriage to Wendy Lee Hanson and they were blessed by the births of their sons, Ross and Paul. For several years Tuna worked as a master plumber in the family-owned business known as Associated Plumbing and Heating, with locations in Crookston and East Grand Forks. He later lived in California, Florida, and Arizona.

He became a member of Crookston Masonic Lodge #141 in 1984, achieved 3rd Degree Master Masonry in 1985, and rose to the title of Exalted Ruler of the Lodge in 1992. He had continued to be actively involved in the Masons wherever he made his home. Tuna’s favorite pastimes included cooking, fishing, and hunting.

Survivors include his 2 sons and daughters-in-law, Ross and Beth Nimens of Duluth, MN and Paul and Nicole Nimens of Spokane, WA; 4 grandchildren: Jasper, Brooks, Embri, and Olive; 4 siblings: Julianne (Tim) Rubley, Mary Jane (Brian) Coe, Jon Nimens, and Jay (Cindy) Nimens; and several nieces, nephews, other relatives, and friends. He was preceded in death by his parents, Bill and Pat; and a brother, Billy Pat, who died at the age of 2. May God richly bless Tuna’s memory.

Mass of Christian Burial for Thomas Charles Nimens will be held at 10:30am, Saturday, October 5, 2019, at the Cathedral of the Immaculate Conception in Crookston with The Rev. Mario Prada, presiding, and Deacon Dennis Bivens, homilist. Visitation with the family will be for the hour prior to the Mass. Inurnment will take place in Calvary Cemetery, Crookston.