Glen Vernon Torkelson, child of God, died peacefully at age 89, on Wednesday, September 18, 2019, at the Villa Nursing Home in Crookston. Glen had a cheerful spirit and celebrated daily devotions with his wife, Lucile. He was a devoted 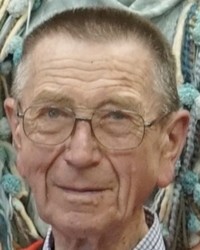 Christian who lived a life of service.

Glen Torkelson was born to Ameel and Ellen (Johnson) on May 30, 1930, on the family farm northwest of Crookston, MN. He attended a 1 room school near the farm through 8th grade. He helped his dad on the family farm where they raised sheep, cattle, swine and chickens; and also farmed grains such as oats, wheat and barley (he later added corn and sugar beets). He was a member of the boy scouts, 4-H and other farmer organizations. Glen graduated with a high school diploma from the Northwest School of Agriculture High School in 1948, where he was on the swim and cross country teams. He was also in the Aggie’s singing clubs. In 1949, he started college at Concordia College in Moorhead, MN. The following year, he enlisted in the Minnesota National Guard.

Glen loved to sing and was a fixture in the community for his love of performing. He started his singing career on the radio singing on the Monday Melodies program on KROX. He met the love of his life, Signe Lucile Aslakson, in 1953, as they were taking voice lessons from the same voice teacher at Concordia. They married in 1954 and started their family on the Torkelson farm north of Crookston.

He was an active member of church choirs and community chorus in Crookston. He had extensive involvement with barbershop singing. For years, he was on the Civic Music League, which brought professional musicians to Crookston for performances. He was a part-time choir director of the St. Paul’s Lutheran Church Choir. He loved the Crookston Community Theater and was in many of their musical productions. When his children were small, he read the Sunday funnies to them every week in various cartoon voices. He sang all his life, even the last week in the hospital when he sang hymns to pass the time.

In 1970, Glen quit farming and went back to finish his agri-business management degree at the Crookston Technical College, which he earned in 1973. He worked for Yates Service Station for a few years before starting Torkelson Repair in 1974, a small engine service center, which he ran for over forty years. He was a charter member of the Northern Tier Solar Energy Society. As a life-long resident of Crookston, he was interested in its history and often participated in projects to preserve older buildings in town.

The memorial service for Glen Vernon Torkelson will be held at 11:00 a.m. Wednesday, September 25, 2019, at St. Paul’s Lutheran Church in Crookston with The Rev. Loren Mellum, officiating. Visitation with the family will be for one hour prior to the service. Burial will take place in the Oakdale Cemetery, Crookston. In lieu of flowers the family asks that memorials be given in Glen’s name to Faith Radio Station KFNW (1200AM) or St. Paul’s Lutheran Church, c/o Lucile Torkelson, 217 South Main #7, Crookston, MN 56716.