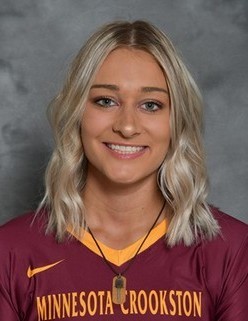 This week’s athlete of the week is UMC Volleyball player, Porsha Porath, a 6’1 Sophomore from Windom where she attended Windom High School.

Porsha has had a great start to her sophomore season. Porath has earned All-Tournament honors in each of the Golden Eagles two tournaments including last weekend’s Huskies Classic in St. Cloud. Porath racked up 63 kills during the four matches with a hitting percentage over .200 in three of the four matches. Porath led the way with 23 kills in UMC’s lone win of the weekend over South Dakota School of Mines and Technology.  She already has 108 kills, 68 digs, and 12 blocks in eight matches this season.  “Porsha has really grown over her time here with us, and she has done a great job for us this season. She has taken on a 6 rotation role which has her passing, attacking, blocking, playing defense, and more – and she has really stepped up to the challenge for us,” said UMC Coach Sarah Rauen.  “She has made a lot of big plays for us and we are excited to see how she continues to grow and improve throughout her career.”
During Porsha’s freshman season she appeared in 26 matches with 24 starts while playing in 66 sets. She had 164.5 points in her debut season with 147 kills averaging 2.23 kills per set. She had a season-high 14 kills against Minnesota State-Mankato in her first year.

Part of your game that needs work – My defense

Do you have a pre-game ritual – Listen to music

What music are you listening to – 6lack (R&B)

You are stranded on a deserted island and you can have ANY three people with you – little brother Cragen, Mom Kristen, Aunt Kim