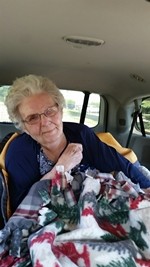 Visitation will be held 1 hour prior to the service at St. John Lutheran Church in Red Lake Falls.

Marie Elizabeth Casavan was born daughter of Fred & Mary (Hilse) Weiss,  in Red Lake County on August 20, 1925. Marie was the youngest of 5 girls. She was baptized and confirmed in Immanuel Lutheran Church in Wylie.  She became a church member of St. John’s Lutheran Church of Red Lake Falls after the two churches consolidated.  Her belief in God was unwavering.

She attended country school East of Wylie and graduated from Lafayette High School in Red Lake Falls, MN in 1943.  She worked in Minneapolis for 2 years.

On October 2, 1945 she was united in marriage to Harvey Casavan at Dorothy Church in Dorothy, MN.  Together they raised their family on their grade A dairy operation farm.  On August 13, 2007 Harvey passed away.

Her greatest joy was spending time with family, especially her grandchildren and great-grandchildren. She and grandson Andy shared a special bond. She enjoyed traveling with Harvey and watching the Minnesota Twins play. Marie was an avid reader and loved music. She especially liked Don Williams “Amanda” and Elton John’s “Sad Songs” and the sing along’s at the Villa.

Marie and Harvey also loved playing cards and visiting area casino’s. She loved visiting with her four sisters and missed their phone conversations as one by one each sister passed away.   She was an awesome cook and would make and freeze her famous rhubarb cream pies.

In 2017, because of failing health, Marie began living at the Villa Nursing Home. She suffered a stroke which paralyzed her left side making it difficult to travel by car. In 2018 she had wheels again when HER van was purchased. She then enjoyed several rides to the farm where she loved listening to the “Nickelodeon”/Juke Box. Marie remained a farmer at heart and loved to check the crops and be around during combining season. She had a contagious laugh and laughed often about the “Bonnie Burger Story”.

SOLOIST: “I Can Only Imagine”