Chickadee Coffee Roasters announced Wednesday morning they had permanently closed the Cofé Bistro location via a Facebook post.  The post also said to “keep on the look out for a Chickadee Coffee location perhaps coming soon.”

The announcement comes the day after the Crookston Housing and Economic Development Authority (CHEDA) Board asked Executive Director Craig Hoiseth to take action on their loan with Chickadee for late payments.  Chickadee Coffee owner Jerry Snow said he is talking with CHEDA and while things are preliminary would like to find a location without the kitchen to focus on coffee and pastries.  “I’m still talking with the economic development authority,” said Snow.  “It’s still preliminary stuff.  There just wasn’t the traffic to sustain a full bistro.  What I’m trying to do is find a way to just focus on the coffee.  If we can move out of that location, get rid of the kitchen, and just do the coffee and pastries.  Maybe in a stand.”

Snow, who is moving to Crookston July 23, had planned to close the bistro July 28 before looking for a new location.  “This was all very sudden,” said Snow.  “We had planned to close on the 28th, but some other stuff had happened, and it forced us to close ahead of schedule.  We’re still scrambling trying to figure out how it all is going to shake out.  This is my first day dealing with it, so I’m still not really sure what’s going on.”

Snow said gift cards will be honored as Chickadee Coffee isn’t disappearing, just reorganizing and changing its scope. “Just because we’re not in the bistro doesn’t mean that Chickadee Coffee in Crookston is disappearing,” said Snow.  We’re just going to probably reorganize and change the scope of our business a little bit.  I’m fairly confident we’re going to be able to figure out something at some point. Just trying to encourage people not to give up and if they have gift cards and really enjoyed the coffee hang on to them.  We’ll honor them as they come up.” 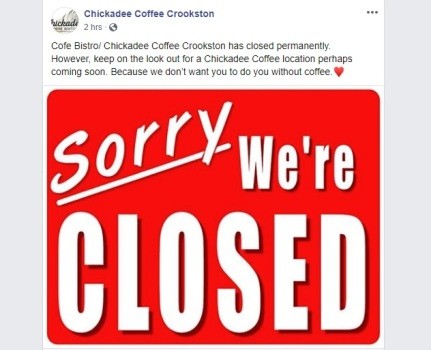