Welcome to another edition of the Sports Feever column.  I wanted to pass along that we won’t have much of a column on July 4. I hope you all will be celebrating Independence Day with family and friends and enjoy the time….but most importantly stay away from the computer and cell phones while spending some quality time with the ones you love, or at least tolerate!

Last weekend we had a chance to celebrate my cousin, Rebecca (Fee) Schultz‘s wedding in Grand Forks and it was a great time.

Anyway, my son Carter and a couple of my nephews and a niece got a chance to meet a couple of NHL players while at the reception.  Paul LaDue of the Los Angeles Kings and a Grand Forks native and former University of North Dakota Fighting Hawk. Luke Johnson, of the Rockford IceHogs and Chicago Blackhawks was also in attendance.  Johnson is also from Grand Forks and a former UND Fighting Hawk,

Also at the wedding were a couple of D-1 athletes with Meleah Biermaier of the University of Minnesota Golden Gopher track team, and Cade Salentine of the University of North Dakota Fighting Hawks football team.  My cousin Rebecca was a pretty solid cross country/track runner (like her dad) too, so there was some pretty impressive athletes at the party. 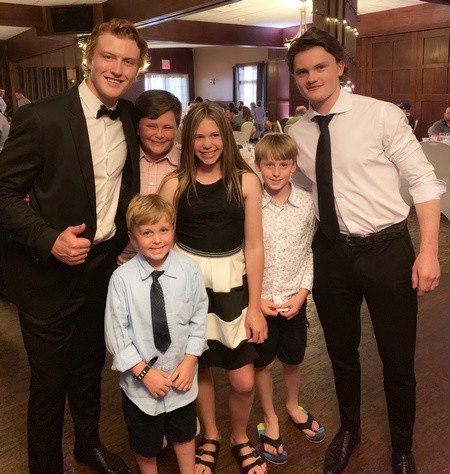 Wrestlers able to compete in the Junior National Duals are born 9/1/1999 and after, plus enrolled in grades 9-12.

In the Greco-Roman style wrestling tournament –
Minnesota Red lost to Ohio 58-5 in their first match.  Zach lost his first match of the Greco-Roman duals by Tech Fall (12-0) at 120 pounds to Dustin Norris.
Minnesota Red beat Michigan Blue 69-4 in the consolation round with eight forfeits in the match.  Zach won his match at 120 pounds by forfeit.
In the third match, Minnesota Red beat North Dakota Blue 42-30 and Zach didn’t wrestle.
In the third place match, Pennsylvania beat Minnesota Red 46-23 and Zach lost his match by Tech fall 16-6.

All golfers must be 18 years of age or have graduated High School.  All proceeds will help support Crookston High School Pirate Athletics.  We are doing a raffle again this year.  Talk to any coach or the staff at Minakwa about buying tickets.

Former University of Minnesota Crookston Golden Eagle baseball player, Zach Seipel, had his first career professional start when took the mound for the Danville Braves (Atlanta Braves affiliate in the rookie league) and pitched five innings, scattering six hits and striking out four while not walking a batter.  He gave up three earned runs and suffered the loss in the game to Johnson City.  Danville lost 3-2 and all three runs Seipel gave up were in the third inning.  Seipel was a catcher in high school and UMC Coach Steve Gust decided to put him in as a relief pitcher and the rest is history.  Now Seipel has been switched to a starting pitcher and the first time turned out to be a pretty solid outing for him, so hopefully, it continues!
Danville just started the season on Wednesday, June 19 and was 3-3 on the year going into Tuesday’s game.

Crookston Pirate Baseball player, Brady Butt, has been named to the Section 8AA Baseball All-Section team.  Butt, a junior this past season, led the team with 20 hits, five doubles and was tied for the team lead with 51 at-bats.  Butt hit .392 on the year and had five runs batted in, scored three runs, and walked twice.  On the mound, Butt pitched in six games and went 1-2 on the season.  He pitched 22 innings with an ERA of 7.32 while giving up 33 hits, striking out 21 and walking 12.

Coach of the Year – James Mulcahy of Perham

Minnesota Crookston will play 10 home matches, with their home opener Friday, September 20 against Concordia-St. Paul at 6 p.m. “We are very excited for the 2019 season, where we will face a variety of opponents who will challenge us each week,” said Head Coach Sarah Rauen. “Our non-conference games will provide us with opportunities to battle teams that we do not see yearly and will prepare us well for the extremely competitive NSIC. We know each weekend in the NSIC will be a challenge and I can’t wait to see how our team takes on each opponent with the experience we gained last season.”

The Golden Eagles will look to improve on a 4-24 mark in 2018 as they have a good core of talent returning for the 2019 season. The 2019 slate will be the third season under the leadership of Head Coach Sarah Rauen. Minnesota Crookston lost only one starter from the 2018 season as the rest of their leaders return.

The Minnesota Wild‘s 2019-20 regular season schedule was released this week. The Wild opens the season in Nashville on Thursday, Oct. 3, at 7 p.m. CT, the first of three straight road games. Minnesota returns to Saint Paul for its home opener on Saturday, Oct. 12, hosting the Pittsburgh Penguins at 7 p.m. CT at Xcel Energy Center. The Wild plays 17 of its first 26 games of the season on the road (Oct. 3-Nov. 30). The nine home games in October and November are the fewest in franchise history.

For more information on the camp and the registration form, CLICK HERE.

Paul Bittner, is playing for the Cleveland Monsters, the AHL affiliate of the Columbus Bluejacket.

Aaron Hollcraft, is a Senior playing baseball for the UMC Golden Eagles.

Aleece Durbin, is a freshman on the University of North Dakota Women’s Track and Field team.

Brita Fagerlund, is a Sophomore on the University of Jamestown Jimmy Women’s Track team.

Ben Trostad, a Freshman playing golf at the University of Minnesota Crookston.

Ethan Magsam, a Freshman playing golf at the University of Minnesota Crookston.

Elise Tangquist, is a Sophomore golfer for the University of Northwestern in St. Paul.

Brady Heppner, is a Junior, playing hockey at St. Johns University in Collegeville.

Bailey Folkers, is a freshman on the University of Wisconsin-Superior women’s basketball team.

Cade Salentine, is a redshirt Freshman playing football at the University of North Dakota.

Ally Tiedemann, a Freshman playing tennis at the University of Minnesota Duluth.

Ben Trostad, a Freshman playing golf at the University of Minnesota Crookston.

Ethan Magsam, a Freshman playing golf at the University of Minnesota Crookston.