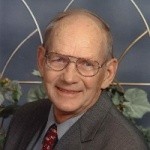 Duane Jerome Halstensgard, 84, Fertile, MN, passed away on Father’s Day, June 16, 2019 at his home in rural Fertile, with his family by his side.

Duane was born January 13, 1935 in Fertile to Julius and Mabel (Lindberg) Halstensgard.  He grew up in rural Fertile and attended country school through the seventh grade.  He went to eighth grade at Fertile public school and then attended and graduated in 1953 from the Northwest School of Agriculture in Crookston, MN.

He was united in marriage to Estelle Flatten on June 6, 1955 at Bethesda Lutheran Church, rural East Grand Forks, MN.

He farmed until 1977, all while spending 32 years working at American Crystal Sugar beet plant in Crookston.  After retirement from American Crystal and renting out the farm he continued to stay active by working for a year at Erikson-Vik-Ganje Funeral Home, driving school bus, selling and repairing appliances, running the Fertile Laundromat and three years at Bergeson Nursery where he had also worked as a kid.

Duane was an avid fisherman and enjoyed spending time on the lake with family and friends. He was a gifted athlete, excelling in football and basketball, where he scored a career high of 37 points in a game before the 3-point shot existed.  His expertise was shared with his sons, grandchildren and many area youth who came under his guiding hand.

He was preceded in death by his parents Julius and Mabel Halstensgard, grandson James Halstensgard, sisters: Joan Simmons and Marlene Fuglseth.