Patricia Marjorie Vind, 81, of Montevideo, MN, formerly of Crookston, passed away Tuesday evening, June 4, 2019, at Luther Haven Nursing Home where she had been a resident since early in 2019. 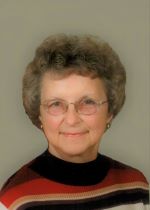 Pat, as she was affectionately known to her family and friends, was born in Gresham, OR on November 16, 1937, one of 5 children of the union of Edward Michael and Marjorie Eugene (Ruby) Yanish. The family, originally from the Fisher, MN area, later returned to the area, living in the communities of Fisher, Bagley, and East Grand Forks before coming back to Fisher. Pat was baptized and confirmed in the Lutheran faith and graduated from Fisher High School with the Class of 1955. On March 7, 1959 she was united in marriage to Gordon Gram Vind at the Trinity Lutheran Church in Fisher. The couple settled in their rural Crookston home and their marriage was blessed with 2 children: Timothy and Tamara. Pat was employed as a bookkeeper for Peterson-Biddick in Crookston and later as an operator for Northwestern Bell. For many years prior to her retirement she was a shipping clerk for the American Crystal Sugar Company in Crookston. During this time in their lives Pat, Gordon, and the kids enjoyed camping and fishing and doing as many “family” things as possible. Retirement for Pat, who was known for her baking, meant more time to make the best sugar cookies and brownies ever, and to share them with family and friends. Her favorite pastimes included crocheting, camping, bowling, delivering Meals on Wheels, playing cards, and being with her sisters. She especially loved time spent with her children and grandchildren and traveling and spending winters in Texas with Gordon. Pat and Gordon moved to Bemidji, MN in 2015, to be closer to their son, Tim, and his family. Sadly, after a valiant 10-year struggle against cancer, Tim passed away on May 20, 2017.

While living in Crookston, Pat and Gordon were longtime members of Trinity Lutheran Church. In Bemidji they were members of Bethel Lutheran Church. Sadly, Gordon passed away on January 12, 2018. Pat moved to Montevideo a short time later to live at Copper Glen, not far from Tammy’s home in nearby Sacred Heart, MN. She had been attending the Cornerstone Baptist Church for the past year. Though her health gradually weakened her, Pat continued to show her love and support for her family. She will be very sadly missed as they give thanks to the Lord for being able to share in her life.

Pat is survived by her daughter and son-in-law, Tamara and Jim Baker of Sacred Heart, MN; daughter-in-law, Lisa Vind of Bemidji, MN; 3 grandchildren: Kelly Kindem and her husband, Cole, and Holly Vind, all of Bemidji, and Benjamin Baker of Sacred Heart; 3 sisters and brothers-in-law: Joyce and Richard Morgan of Grand Forks, ND, and Carol and Arly Aune and Donna and Gary Mosher, all of East Grand Forks, MN;  3 sisters-in-law: Ilene Yanish of Fisher, MN, and Mary Lessard and Merna Vind, both of Crookston, MN; and 2 brothers-in-law, Duane Stinar of Crookston and Curt Johnson of Grand Forks; and many nieces, nephews, extended family, and friends. In addition to Gordon, her beloved husband of 58 years, and their treasured son, Tim, Pat was preceded in death by her parents, Edward and Marjorie Yanish; her brother, Edward Yanish; brothers-in-law and sisters-in-law: Charles, Roger, and Tom Vind, Charlotte Stinar, Walter Lessard, Henrietta and Elwood Hill, and Verna Johnson. Blessed be the memory of Patricia Marjorie Vind.

A memorial service celebrating the life of Pat Vind will be held at 10:30AM, Thursday, June 13, 2019, at the Trinity Lutheran Church in Crookston with The Rev. Greg Isaacson and the Rev. Mark Kindem, officiating. Visitation will be at the Stenshoel-Houske Funeral Home on Wednesday, June 12th, from 5-7PM, with a 7PM prayer service, and will continue at the church from 9:30 to 10:30AM Thursday. Inurnment will take place in the Greenwood Cemetery, Fisher, MN. Memorials may be directed to the family.