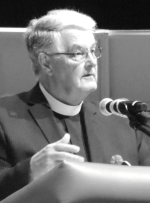 Dean Michael Bell was born in Minneapolis, MN, on December 27, 1945.  He was baptized on January 10, 1946 at the orphanage in Minneapolis.  Through adoption, he was welcomed into the home of his hew parents, Alvin and Edna (Grondahl) Bell.  He was raised on the farm in Hegne Township.  In 1960, he was confirmed at Grace Lutheran Church.  During his high school years, Dean was active in speech, debate, class plays, band and choir, following his graduation in 1963, he attended Moorhead State University, majoring in Political Science and minoring in History.  He taught high school social studies for four years before returning to the family farm.

Dean married MaryAnn LaChappelle in Baudette, MN, on August 6, 1971.  After two years in Verona, ND, they moved back to Ada where they raised chickens and dairy cows until 1994.    They were blessed with Sarah, Rachel, Ruth, Naomi, and Luther.  These children were taught the meaning of hard work as they all helped with daily chores. Dean attended Concordia University Wisconsin in 1978 and received lay ministry certification in 1980.  He also attended classes at Dr. Martin Luther College in New Ulm.  After his certification, Dean served as a lay minister in Georgetown, McIntosh, and Fosston, MN.  He went through the Lutheran Church–Missouri Synod colloquy process in 1996 and was ordained into the Holy Ministry.  After the church in Fosston closed, Dean served in congregations in Mahnomen and St, John’s (rural Ada), until his retirement in 2017.  During this time, he attended many extension classes offered by the synod.

Dean served as an LCMS Reconciler for 16 years, Board of Regents of Concordia University Wisconsin for 6 years, Board of Directors of LCMS for 2 years, Board of Directors of the MN North District for 7 years, and he served on the Board of Regents for the Fort Wayne Seminary from 2013 until his death.  He also served on the board for the Confessional Lutheran Education Fund for many years.  This led him to travel to the Philippines for several weeks to teach seminarians in their school.  Dean was an avid reader having more than 2,000 books in his library. On May 17, 2019, Dean was awarded the Doctor of Divinity Degree, honoris causa, an honorary doctorate, from the Lutheran Church Missouri Seminary in Fort Wayne, IN.

Visitation: Sunday, June 2, from 5:00 to7:00PM with a 6:30 prayer service at the church and one hour before the service Monday at the church.