Crookston High School Coach Mike Geffre will be inducted into the Minnesota State Tennis Coaches Association Hall of Fame on Monday, June 3 in Brooklyn Center as part of the Minnesota State High School League State Boys Tennis banquet.  The banquet/dinner will start at 6:45 p.m. and cost $26 per person.  Geffre will be honored along with the Class A and AA State Tennis team and individual participants.
Anybody looking at attending the banquet has to make reservations by Noon on May 30.  For more information on the banquet, click here. 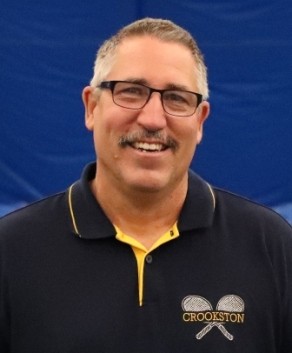 Minnesota State High School League State Tournament nine times with the girls and 13 times with the boys. Crookston has been a tennis dynasty in the northern part of the state during Mike’s tenure as coach. Coaches around the area always know that Crookston comes to play and play well.
Mike has also coached two State Doubles Champions for the boys and one State Doubles Champion for the girls. Other than all of the State Tournament appearances, one of Mike’s greatest highlights was having the opportunity to coach his daughter Amanda throughout her high school career.
Mike has a wife, Lori Schlenker, a daughter Amanda, and twin sons, Isaac and Simon.
Tennis Accolades:
Head Boys Tennis 1986-2017 – 31 years
Head Girls Tennis 1989 – 2018 – 29 years
13 Team Appearances at the Minnesota State High School League State Boys Tennis Tournament
9 Team Appearances at the Minnesota State High School League State Girls Tennis Tournament
2 – State Boys Doubles Championships
1 – State Girls Doubles Championship