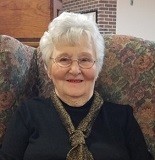 92, of Crookston, MN, passed away Thursday, May 9, 2019, at the Villa St. Vincent Nursing Home in Crookston with her loving family at her side.

Elsie Marie was born to the late Edward R. and Kathleen (Norton) Keefe on December 21, 1926, in Walker, MN. In 1930 the family moved to Larimore, ND. In 1933 the Keefe’s purchased a farm one mile east of Carthage, (seven miles east of East Grand Forks). Elsie began her education as a first grader in the Cummings school. She graduated from eighth grade in the Mallory School and went on the attend and graduate from Cathedral High School in Crookston, MN on June 2, 1944. She entered St. Michael’s School of Nursing in July of 1944. On December 21, 1945, Elsie was united in marriage to Charles A. Bateman in the St. Michael’s Church Rectory. Elsie and Charles then moved to Washougal, Washington. Charles worked for the Vern Smith Bakery, and Elsie was employed at the Washougal Woolen Mill. Their daughter, Carolyn Ann, was born there on July 13, 1947. In May of 1948 Elsie, Charles, and Carolyn moved back to East Grand Forks, where the couple built a home on North Second Street. They moved to 605 North First Street in 1951. Elsie worked part time at the DAV-VFW in Grand Forks, and from 1961 to 1973 was employed at the Eagles in East Grand Forks. Elsie graduated from Aaker’s Business School in May of 1969, and then worked for Congress, Inc. until 1973. After moving to Crookston Elsie worked for Holcomb, Knutson and Co CPA, and later for the Cathedral of the Immaculate Conception Parish and Cathedral School as secretary-bookkeeper. In 1978 she moved to Grand Forks to work for Target, Inc. until 1983. In September of 1983 Elsie and Charles purchased a home on Lake Sallie, near Detroit Lakes. Elsie was then employed at Foltz Trucking, Inc. in Detroit Lakes from January, 1984 until her retirement in May, 1988. Sadly, Charles passed away February 17, 1994.

On July 13, 1996 Elsie moved to her home at 316 Summit in Crookston. She married Clarence Tolness at the Cathedral of Immaculate Conception on August 16, 1997 and the couple made their home in Crookston. Clarence passed away June 26, 2001.

Elsie was a devoted member of the Cathedral of the Immaculate Conception. She was also a member of Catholic Daughters Bishop Schenk, St. Francis Guild, and the RSVP, Eagles and VFW Auxiliaries.

The Mass of Christian Burial for Elsie Bateman will be held at the Cathedral of the Immaculate Conception at 2:30pm, Thursday, May 16, 2019, with The Very Rev. Vincent Miller, presiding. Visitation will be for one hour prior to the Funeral. Burial will follow in the Calvary Cemetery, Crookston.