Arlene Mae Duckworth, 94, of Warroad, MN died on April 25, 2019, at the Warroad Senior Living Center in Warroad. Arlene (Zutzie) was born in Louisville Township, Red Lake County, MN on May 2, 1924, the youngest daughter of Arthur and Amelia (Hilse) Zutz. She 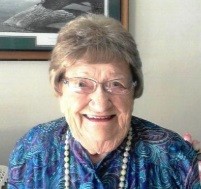 grew up in Red Lake Falls, MN, where she graduated from Lafayette High School. On June 14, 1947, Arlene was united in marriage to Leonard D. Duckworth in Crookston, MN, where they made their home and raised their children. They were members of the United Methodist Church in Crookston. Arlene worked in several places in Crookston including Savards in her early years and later Johnson’s Super Fair and Baloney Bills.

After Leonard retired from Burlington Northern Railroad in 1984, they divided their time between Minnesota and Arizona until moving to Mesa, AZ, permanently. Following Leonard’s death in 2011, Arlene moved to the Warroad Senior Living Center in Warroad. She was an enthusiastic bowler and also enjoyed fishing, playing cards and was also an avid Twins and Vikings fan. Arlene loved her family, friends and life in general She will be dearly missed.

She is survived by her children, Barbara (Eugene) Smith of Prior Lake, MN, Gary (Fiancee, Marie Lewis) of Aloha, OR, Alan (Joyce) of Dexter, OR, and Dwayne of Warroad, MN; sister-in-law, Doreen Duckworth of Phoenix, AZ; nine grandchildren, 18 great-grandchildren; three great-great-grandchildren and many other relatives and friends.

Besides her husband of 64 years, Leonard, Arlene was preceded in death by her parents; her son, Randall, in 1996; brother, Raymond (Margaret) Zutz; sisters, Myrtle (Albert) Nelson and Lucille (Elmer) Rock; brother-in-law and sister-in-law Donald (Jeanne) Duckworth and brother-in-law Robert Duckworth.

Services will be held at a later date.