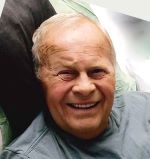 He was born January 19, 1949 to Warren and Caroline (Aagenes) Swenby in Crookston, MN. Curtis graduated from Fertile-Beltrami High School in 1967. Upon graduation he worked for local carpenters learning various building techniques.

Curtis started his own business at the age of 21 when he contracted his first home in Crookston, MN.  He continued to build numerous homes, shops, additions, remodels, concrete, and cabinets for 100’s of customers.  He always prided himself on being called back by those customers to complete other projects that they needed. Curtis continued to be self-employed at the same time as working as a Superintendent for Construction Engineers, Nodak, Strata, and F-M Asphalt. His knowledge of commercial building was quickly enhanced. In 1995, his son Chris joined the construction company and the two of them continued to build the construction business adding a custom cabinet shop along with many other services.

On August 1, 1970, he married Carol Hauge at Concordia Church in Fertile. They made their home in rural Fertile, where he built their home 4 miles from town. Close enough to go for coffee a few times a day. He so very much enjoyed that early morning visit and especially the coffee.

His family was his greatest accomplishment in life. He was so very proud of his children and grandchildren. The family events at his home were always filled with laughter and action: four wheel races, snowmobiling, bonfires, and anything else that brought them all together. Every time the evening would come and it was time for everyone to leave, he would stand either in the window or outside waving goodbye. He loved to dance and danced with Carol for 52 years.

Curt was a lifetime member of Concordia Church where he served on church council and committees. He also served on a committee in Crookston which helped direct Construction Trade Programs in high schools.

Visitation: Thursday, April 25, 4-6 PM with a 6:00 prayer service and one hour before the service at the church.