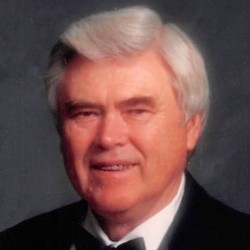 Roger was born on July 25, 1931 in Grand Forks, ND to Soren O. and Josephine (Salverson) Sorenson. He grew up on their farm near Fisher, the third of eight children, and spent his early years milking cows, raising pigs, and farming alongside his father and brothers. He loved the farm, but more than that, Roger loved to sing. He sang with his brothers Wayne, Dale, and Clark as the Sorenson Brothers quartet. The brothers sang for audiences across the region for many years and were later joined by Dale’s wife Janet (Thune), who both accompanied the foursome and lent her voice to their repertoire—which soon consisted almost entirely of gospel music. In the last years, he spent hours perfecting a recording of the brothers’ favorite gospel songs, and proceeded to disburse CDs to family, friends, acquaintances, and sometimes a complete stranger whom he thought could use a little music and gospel in their life.

Roger attended school in a one-room schoolhouse in rural Bygland, Minn. through the eighth grade, then boarded with a family in East Grand Forks, Minn. to attend high school there. After graduating in 1949, he went to Bethany Lutheran College in Mankato, Minn. for one year before heading back home to wait for his draft number to be drawn. Roger served in the United States Army during the Korean War and received an honorable discharge in October 1954.

Roger met Janet Swanson at her home in rural Kragnes, Minn. while selling pots and pans during a summer break from his studies at the University of North Dakota. He graduated from UND in 1957 with degrees in History and English. Roger and Janet were married in Moorhead, Minn. on August 17, 1958. Together they raised six children — Shane, Brent, Dwight, Brenda, Brian, and Dana — in a loving, Christian home, where there was always an abundance of neighbor kids, family, friends, and laughter.

At the start of his career, Roger was editor of the East Grand Forks Record. He joined the Grand Forks Herald as classified ads manager and later co-owned and operated the Valley Shopper in Crookston, Minn. He then co-founded and ran the Tri-County Press, which circulated throughout the Grand Forks area. When his ‘shopper’ days ended, Roger sold insurance, opened Sorenson Real Estate, and was a picture framer.

Roger was a dedicated member of River Heights Lutheran Church, East Grand Forks, raising his kids to know and love their Savior. He served as a member of the church board and, when a new building for the church was built in 1981, Roger served as chair of the building committee.

Throughout his life, Roger stayed true to his love of music. Wherever he was, he rounded up guys who could sing, creating quartets in high school, college, and even as he sailed across the ocean with his fellow Army servicemen. He sang throughout his life with the Valley Chordsman Chorus and numerous barbershop quartets, singing tenor primarily – as the story goes – because someone told him that if he took the tenor part, he would always have a quartet to sing with. Janet and the kids spent many hours in the audience and days traveling with Roger as he performed throughout the region and took his family to hear many of the top international quartets during the heyday of barbershop music.

Whatever he did, Roger wanted his family close by. He was tireless when it came to the activities of his kids and grandkids and, amid the chaos, taught them to appreciate the simple things because he found great joy in the little stuff.

Roger lovingly cared for his wife Janet in their home during her three-year battle with ALS (Lou Gehrig’s disease) and remained devoted to her memory during the 18 years that followed her death in June of 2001. He lived independently in his home in rural Fisher until the last months of his life. His children remember their Dad most for his unending optimism and willingness to try anything, his sense of humor, his steadfast and child-like faith, his incredible kindness, patience, and generosity, and the tremendous love he showed to his family, friends, and mankind.

Roger is survived by his six children, nine grandchildren, and their spouses: Shane, Fisher; Brent (Linda), Mankato, Minn. and their sons Benjamin (Cami) and Lucas; Dwight (LeAnne), Fisher, and their children Adam and Laura; Brenda, Madison, Wis.; Brian (Catherine), Fisher, and their children Matthew (Brooke), Blake, and Wendy; and Dana (Yaritzy), Minneapolis, Minn. and their daughters Josey and Sophia. He is also survived by his brothers Wayne (Jeannette), Dale (Janet), and Clark (Doris), sister Sylvia Mosher, all of Fisher, and a host of nieces, nephews, family and friends.

He was preceded in death by his wife Janet, parents Soren and Josie, brothers Oliver (Sonny) and Ordean, sister Carol Jean, and sister-in-law Joyce.

Services for Roger will be held at River Heights Lutheran Church in East Grand Forks. The memorial service will be held Wednesday, April 3 at 11 a.m. with Reverend Noah Thompson officiating. Visitation will be held Tuesday, April 2 from 5 p.m. to 7 p.m., with a prayer service at 7 p.m. Interment will be held in the spring at Greenwood Cemetery, Fisher.

Roger’s family wishes to extend their heartfelt thanks to the nurses and staff of Maple View Memory Care, Grand Forks, who cared for him as they would their own father and grandfather; and to the physicians, nurses and staff of Northwood Deaconess Nursing Home for their tender care at the very end of his life.