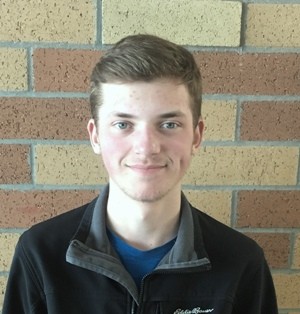 The athlete of the week is Crookston Pirate Boy’s hockey player, Jack Ricord, a senior goaltender.  Jack has had a strong finish to the season making a lot of big saves and picking up some wins and even in the losses he has played well.  The senior has stepped up his game at the end of the year and is 6-10-1 with a goals against average of 3.69 and a save percentage of 88 percent along with one shutout.  In the last game of the year, at Roseau, Jack made 42 saves in the loss, including 5 in overtime to keep the Pirates in the game.  In the Red Lake Falls game last week, Jack made 10 saves in two periods and against International Falls he made 27 saves for wins in both games.
Jack will be asked to make some big saves in the playoffs as he is the man in the net for the postseason. “Jack has really stepped up his game as the year has gone on, solidified his spot as our number one goalie heading into the playoffs. While the stats don’t necessarily bear it out, Jack has been a rock in goal for us and his steady presence over the last month has been huge for the success of this team,” said Pirate Boys Hockey Coach Josh Hardy. “He is great at controlling the rebounds and not panicking when there is a scramble in front of his net. I’m excited to watch him continue to step up his game as we enter the playoffs!”
Jack is in his second year of playing varsity hockey.  Jack is a two-sport athlete and also competes on the Pirate Boys Golf team where he has played varsity golf since his Freshman year.
Jack is also a member of the Crookston High School Leo Club and he is on the B honor roll.

The best part of your game – Pre-game

Do you have a pre-game ritual – Juggling

What music are you listening too – Rap

You’re stranded on a deserted island and you can have ANY three people with you – Sam Overgaard, Phrank Brule, Jaden Lubarski