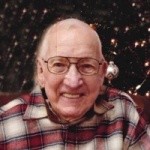 Donald Orrin Rude was born on July 18, 1928, at home on the family farm near Perley, MN, the son of Iver and Martha (Qualley) Rude. He grew up on the farm with his eight brothers and sisters. He attended Concordia Lutheran Church east of Hendrum where he was baptized and confirmed.  He attended country school until he started working in his teen years. Donald served in the United States Army as a PFC during the Korean War and was stationed in Ft. Flagger, WA, until his honorable discharge in 1953.  He returned home and started farming with his family.

Donald met Mary Evenson and they were united in marriage on December 11, 1958. They made their home on a farm west of Borup and raised their children. He raised dairy cows for many years and also had an assortment of chickens, hogs, and dairy cows. Donald was very proud of his family and farming background and always enjoyed visiting with the neighbors. They sold eggs and butchered many chickens each year. He and Mary also operated café’s in Borup for a number of years where Donald appreciated the customers and visiting over coffee. He was an active member serving on boards including the Borup Lions Club, Borup Community Club, the Ada American Legion Post, and Concordia Lutheran Church Council. For years, Don would place markers and flags on Concordia Lutheran Cemetery for Memorial Day. He later drove for Tri Valley Opportunity Council.

After Mary passed away in 1980, Donald raised his family on the farm and later moved into Borup where he lived until 2008 when he moved to an apartment in Ada. He enjoyed socializing and playing pinochle with friends. He would also travel to Garden Hills Berry Farm near Fertile to pick strawberries all day. He became a resident of the Halstad Living Center in 2016 when his health began to fail. He celebrated his 90thbirthday last July with family and friends.