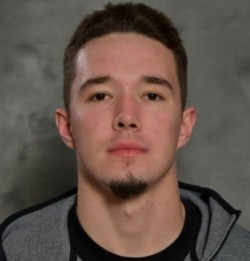 Week after an outstanding weekend against University of Minnesota Duluth, and St. Cloud State University, as he helped the Golden Eagles to their first NSIC weekend sweep of the season. Cleary has been named NSIC North Division Player of the Week twice this season. He was previously selected December 10, 2018.
Cleary averaged 28.5 points, 5.0 assists, and 2.0 rebounds per game in two victories for UMC. He shot 22-of-39 from the field for 56.4 percent and was 7-of-10 for 70.0 percent from three-point range. Cleary was 6-of-7 from the foul line for 85.7 percent. Cleary scored 28 points against St. Cloud State University and 29 points against the University of Minnesota Duluth. Cleary is ranked 13th all-time in the NSIC with 1,237 career points. He needs eight points to surpass Ryan Rasmussen of Minnesota Duluth for 12th all-time, and 11 points to move past Terez Van Pelt of Concordia University-St. Paul for 11th. Cleary has scored 1,703 career points. He needs 215 points to move past Joe Hasz for a school-record for points.
Trevon Evans of the University of Sioux Falls was selected as the NSIC South Division Player of the Week.
UMC returns to action Friday, January 11 at Northern State University, and Saturday, January 12 versus Minnesota State University Moorhead.