Paul Merriall Midderigh, 55, of Crookston, MN, passed away peacefully in Altru Hospital, early Thursday morning, April 12, 2018. Paul had a heart attack several days previously and had been courageously fighting for life since. 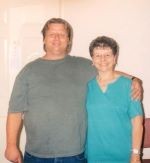 Paul was born in Millington, TN on October 30, 1962, the son of Paul and Barbara (Lentsch) Midderigh. He moved with his family to San Diego, CA as an infant, and in 1967 to Crookston, where he attended elementary and middle school, and Central High School. For the next several years Paul lived in San Luis Obispo, CA, Oahu, Hawaii, and Reno, NV, working for various businesses. After a move to Tacoma, WA he managed a crew doing commercial cleaning for several Tacoma offices and businesses. He was later employed by a company providing parts used in the manufacture of airliners made by Boeing. After a number of setbacks due to ill-health, Paul retired and did a few things to help out at the apartment complex where he was living. He returned to Crookston in December of 2016 and had been living in Oak Court. Paul was an avid sports fan, particularly of football and baseball, and loved to go fishing whenever he got the chance.
Paul is survived by his mother and step-father, Barbara and Russell LaChance of Crookston, MN; brother, Brian Midderigh (Kathy Elbinger) of Crookston and their children, Derek and Kyra; sister, Angela Stewart of Moorhead, MN and her son, Aaron; and a niece and nephew, Garrett and Breanna of Moorhead, children of Paul’s sister, Peggy Shafer, who passed away on January 18, 2009. He also leaves many aunts, uncles, cousins, and other family members. He was preceded in death by his father, Paul Midderigh; sister, Peggy Shafer; and grandparents, John and Rose Lentsch, and William and Violet Midderigh. Blessed be Paul’s memory.
Services for Paul Merriall Midderigh have been set. A memorial service for Paul will be held at 2:00PM, Friday, May 18, 2018, at the Stenshoel-Houske Funeral Home in Crookston with The Rev. Steve Bohler, officiating. Visitation with the family will from 1-2pm. Inurnment will be in the Oakdale Cemetery at a later date.
www.stenshoelhouske.com